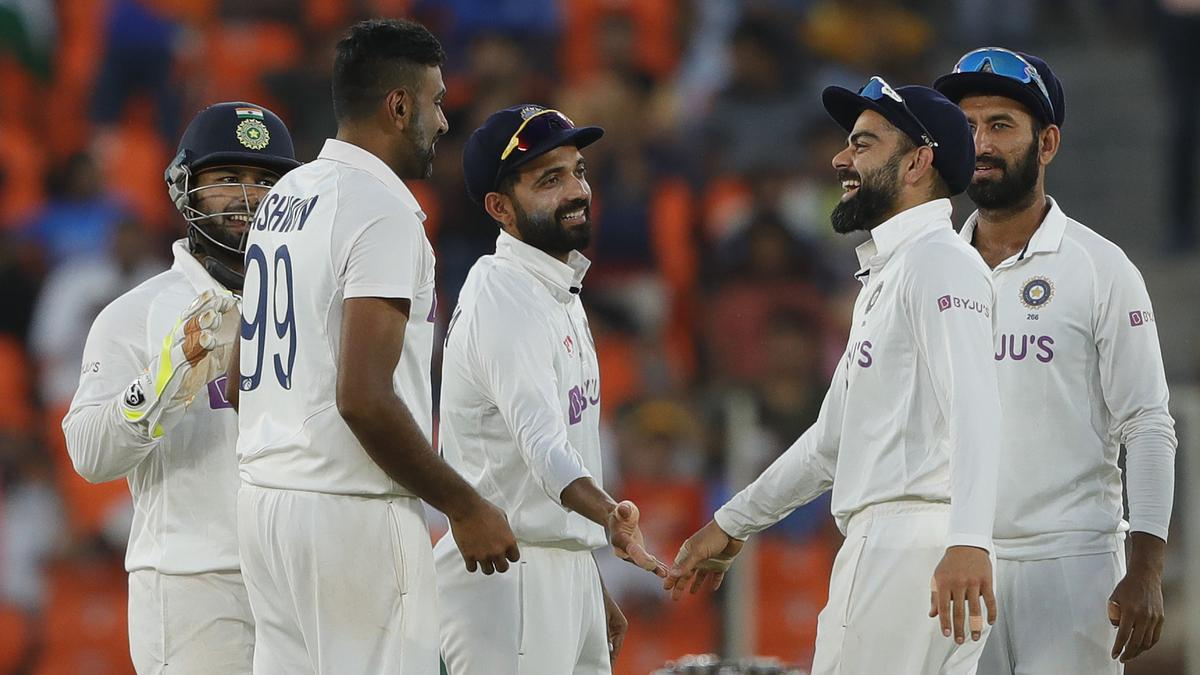 From India beating England by 10 wickets in the shortest Test since the second World War to Manchester City extending its winning run to 20 matches, here’s a wrap-up of all the major sports news and updates from the week that passed.

Here’s a wrap-up of all the major sports news and updates from the week (February 22 to 28) that passed: Axar Patel removed Zak Crawley and Jonny Bairstow for ducks in the first over of England’s second innings.   –  Sportzpics

India won by 10 wickets late on the second day of the third Test to take a 2-1 series lead and move a step closer to a berth in the World Test Championship final. (REPORT)

Jasprit Bumrah has been released from India’s squad for the fourth and final Test against England in Ahmedabad, starting March 4, because of “personal reasons”. (REPORT)

India has announced an 18-women squad to take on South Africa in the five-match ODI and three-match T20I series, beginning in Lucknow from March 7. (REPORT)

Ravichandran Ashwin became the second-fastest ever to 400 Test wickets when he removed Jofra Archer on day two of the third Test in Ahmedabad. (REPORT)

Ishant Sharma became the second Indian seamer, and 11th overall, to reach 100 Tests when he took the field against England on day one of the third Test. (REPORT)

Umar Akmal’s 18-month ban has been slashed by six months by the Court of Arbitration for Sports (CAS), making him eligible to return to competitive cricket. (REPORT)

Yusuf Pathan, who was part of the Indian teams that won the 2007 World T20 and the 2011 World Cup, has announced his retirement from all forms of the game. (REPORT)

On an exciting final day of the league stage, Andhra pipped Tamil Nadu and Jharkhand on Net Run Rate to top the Elite Group B and qualify for the quarterfinals of the Vijay Hazare Trophy on Sunday. (REPORT)

Devdutt Padikkal’s third successive century earned Karnataka a 10-wicket win over Railways and a place in the quarterfinals of the Vijay Hazare Trophy. (REPORT)

The Table Tennis Federation of India has announced that Shillong will host the next edition of the National table tennis championship. (REPORT)

Manchester City extended its lead at the top of the Premier League table after a 2-1 win over West Ham United on Saturday – its 20th straight win in all competitions. (REPORT)

Robert Lewandowski struck a brace to steer Bayern Munich to a 5-1 win over Cologne to open up a five-point lead in the Bundesliga. (REPORT)

Megan Rapinoe scored twice as the United States won the SheBelieves Cup title with a massive 6-0 victory over Argentina. (REPORT)

NorthEast United FC’s resurgence under Khalid Jamil – the side on a nine-match unbeaten run – saw it beat Kerala Blasters to seal its spot in the semifinal of the Indian Super League. (REPORT)

Injury-hit Juventus was held at Hellas Verona to 1-1 as its hopes of a record-extending 10th successive Serie A title took a blow on Saturday. (REPORT)

Lionel Messi scored twice in the second half as Barcelona stayed near the top of the La Liga by defeating Elche 3-0 on Wednesday. (REPORT)

The All India Football Federation has announced that Odisha will host the 2020-21 edition of the Indian Women’s League. (REPORT)

The United States Soccer has voted to end a ban on players kneeling during the national anthem, something they have done to protest racial inequality and police brutality. (REPORT)

FC Goa coach Juan Ferrando has had among the most challenging start to life in India. In this episode of The Full Time Show, he speaks to Aashin Prasad about his maiden season in ISL, quarantine and player management, coaching style, contentious refereeing and his takeaways from the season. World number one Ash Barty has withdrawn from next week’s Qatar Open in Doha due to a left leg injury. (REPORT)

Ankita Raina spoke about her memorable time in Australia, during which she made her Grand Slam main draw debut and broke into the top-100 in doubles. (READ)

The ISSF World Cup in Changwon, Korea, scheduled to be staged from April 16 to 27, has been postponed owing to restrictions imposed to stem the spread of the COVID-19 pandemic. (REPORT)

Olympian Mairaj Ahmad Khan shot 48 with two rounds of 24 to be in ninth place in skeet at the Shotgun World Cup in Cairo. (REPORT)

World No. 3 Germany blanked the Indian women’s hockey team 5-0 in their first game of the four-match tour in Dusseldorf. (REPORT)

The restructured Hockey India National Championships will restart in March after a break of one year following the cancellation of last year’s events due to the COVID-19 pandemic. (REPORT)

Reigning world champion PV Sindhu has got an easy passage to the quarterfinals but her compatriot Saina Nehwal was not as fortunate, drawing a tougher first-round opponent in the prestigious All England Championships. (REPORT) Vinesh Phogat beat reigning European champion Vanessa Kaladzinskay 10-8 in the final to win her first tournament in a year at the XXIV Outstanding Ukrainian Wrestlers and Coaches Memorial in Kyiv. (REPORT)

Olympic-qualified wrestlers Bajrang Punia and Vinesh Phogat will compete in the Matteo Pellicone event in Rome from March 10 to 15. These wrestlers were allowed to skip the Individual World Cup held in Serbia in December following the COVID-induced break. (REPORT)

Indian professional boxing star Vijender Singh will be back in action next month after more than a year-long hiatus forced by COVID-19, his promoters have announced. (REPORT)

The torch relay for the postponed Tokyo Olympics is to start in a month, which should be a sign that the troubled Olympics are on track to begin on July 23. (REPORT)

Russian athletes won’t be able to compete at next month’s European indoor championships because a new anti-doping plan won’t be approved in time, the governing body of track said. (REPORT)

Ferrari will return to the top flight of endurance racing with a hypercar entry in 2023, competing for outright Le Mans 24 Hours victory for the first time in 50 years. (REPORT)

MotoGP team boss Fausto Gresini died at the age of 60 after a prolonged battle with COVID-19. (REPORT)

Alfa Romeo will not develop its new Formula One car beyond the summer to give it the best shot at a step up in 2022. (REPORT)