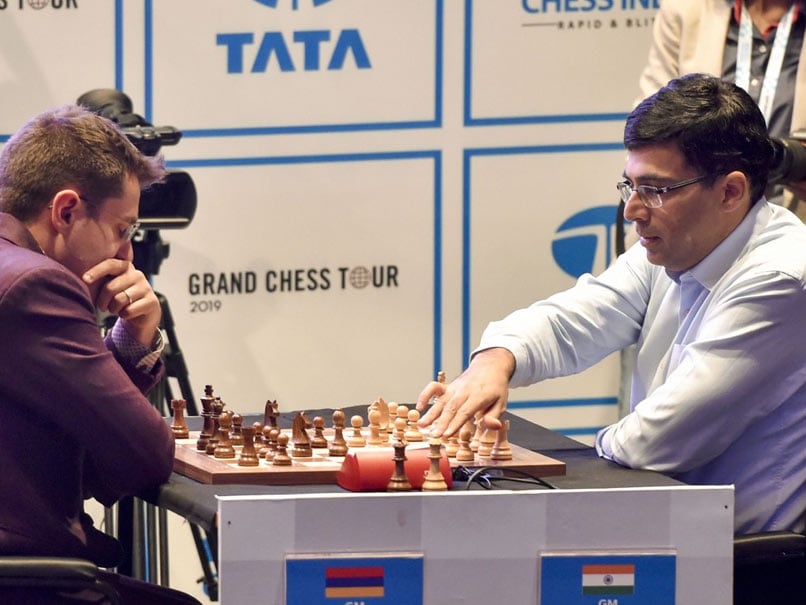 
Five-time world champion Viswanathan Anand had another mixed day as he won one, lost one and drew one game in the Tata Steel Rapid and blitz chess tournament in Kolkata on Saturday. World champion Magnus Carlsen of Norway extended his lead by three points on the second day of the tournament which is a part of the grand chess tour. With three more rounds in rapid and another 18 in blitz to come, it is anyone’s game but Carlsen seems to be ruling the roost currently. The reigning world champion, who is enjoying dominance in every event he plays, won the first two games of the day, disposing off Hikaru Nakamura of United States and Anish Giri of Holland and then survived some anxious moments against Indian star Vidit Gujrathi to finally get a draw.

With 10 points to his credit out of a possible 12, Carlsen is way ahead of Nakamura and Wesley So who both share the second spot with seven points each.

Anand is in joint third spot with six points along with Ding Liren of China and Giri.

The next group is also just a point behind with Harikrishna and Gujrathi sharing the seventh spot on five points with Aronian while Nepomniachtchi has just three points.

For Anand, a great start ended with a whimper yet again. It was a supershow against Aronian wherein Anand employed the Italian game as white and improved his position inch by inch to get an edge and then got in to a better endgame wherein Aronian was no match.

Following this victory, Anand survived an onslaught by Nakamura who played white and it looked like another good day in office till he ended up worse against Giri in the final game of the day. Giri was optimistic once Anand allowed a wreckage on his king side.

The Dutchman won a pawn and then slowly but surely tightened the noose, leaving Anand with another day on a fifty percent score.

The good news for Anand could well be that Wesley So, his nearest competitor for a spot in the grand finale at London is just a point ahead of him at this juncture.

Anand will have to do well enough in the remaining games to ensure the distance between him and the Filipino-turned-American does not grow too much.

Carlsen was yet again the star of the day and displayed some exceptional chess for the chess buffs across the world.

If Nakamura had his troubles in the middle game, Anish Giri learned some endgame technique at the expense of losing a point.

The high point from Indian perspective was Vidit Gujrathi coming close to causing the real sensation as he had a pawn plus endgame against Carlsen.

However, as things transpired, Carlsen defended immaculately and got the draw in the end.