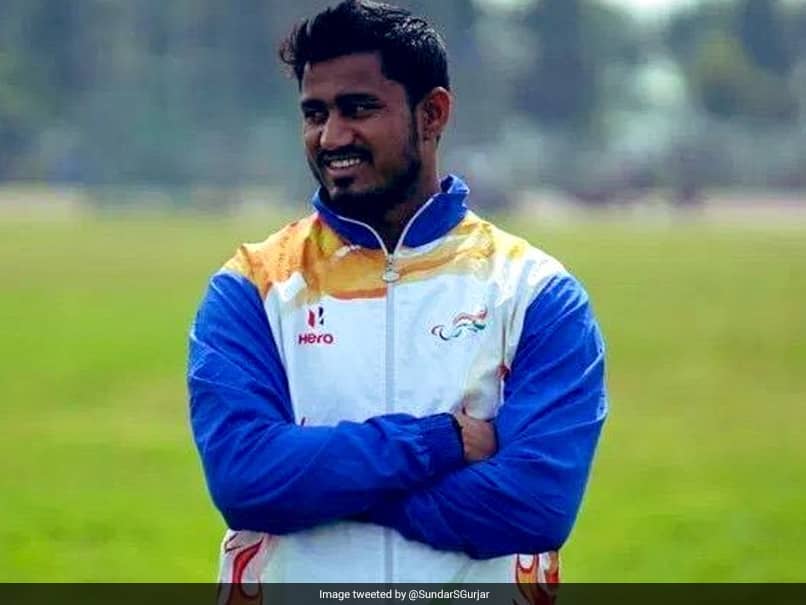 Sundar Singh Gurjar is among three javelin throwers to secure the quota for the 2020 Tokyo Paralympics.© Twitter


Top javelin thrower Sundar Singh Gurjar overcame a shoulder injury to claim the second gold for India with a season best performance at the ongoing World Para Athletics Championships. In doing so, Sundar not only defended his London Worlds 2017 title but also became the only second Indian to have clinched two World Championships medal after Devendra Jhajharia’s gold and silver in the 2013 Lyon and 2015 Doha Championships. India now have two golds, one silver and a bronze so far in the tournament.

Staying in the second place till his fifth attempt, Sundar on Sunday hurled the javelin to a distance of 61.22 metres in his sixth attempt, enough to jump to the top of the results table tumbling Sri Lanka’s Dinesh P. Herath Mudiyanselage who led throughout with his 60.59 metre throw in the first attempt.

It was in fact a double delight for India as Ajeet Singh managed 59.46 metres to settle for the bronze. Compatriot Rinku Rinku took the fourth place with a throw of 57.59 metres. Thus, India secured three more slots for Tokyo 2020 Paralympics.

Earlier, Sandeep Chaudhary and Sumit Antil had secured the quota for next year’s Paralympics Games by finishing at the top two spots in the Javelin F64 finals in the ongoing tournament.