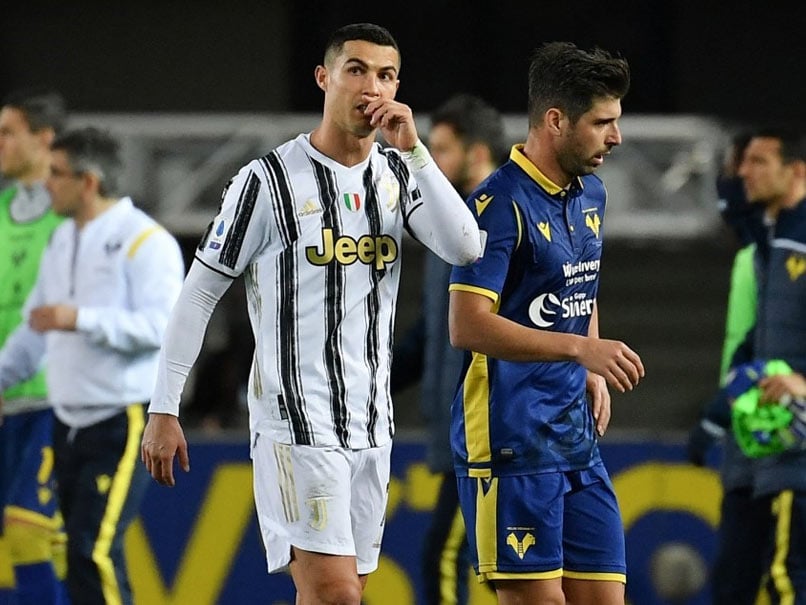 Serie A: Cristiano Ronaldo Scores As Juventus Held In Verona


Cristiano Ronaldo scored his 19th goal this campaign but champions Juventus had to settle for a 1-1 draw at Hellas Verona in Serie A on Saturday. The draw gives leaders Inter Milan the chance to pull 10 points clear of Juventus when they play mid-table Genoa at the San Siro on Sunday. Juventus are third and three points adrift of second-placed AC Milan who travel to Roma, two points behind the champions in fourth, on Sunday.

“We managed to take the lead, which was the hardest part, it’s a pity not being able to hold it,” said Juve coach Andrea Pirlo.

Pirlo’s side paid for their many absences and a redesigned defence with Leonardo Bonucci and Giorgio Chiellini out injured and Danilo suspended.

Also missing were Juan Cuadrado, Arthur and Paulo Dybala to injury with Alvaro Morata recovering from a viral infection.

“We lacked experienced players, we had many youngsters on the pitch and there are details that they don’t understand,” continued Pirlo.

“I asked Ronaldo and Alex Sandro to make their voices heard, but it wasn’t enough.”

Goalkeeper Wojciech Szczesny and the post saved Juventus just minutes into the game at the Stadio Bentegodi following a Davide Faraoni header.

Ronaldo broke through four minutes after the break connecting with a perfect lay-off from Federico Chiesa to fire in.

Aaron Ramsey missed a chance for a second before the hour mark after a Dejan Kulusevski pull-back which the Verona defence closed down.

Antonin Barak headed in an equaliser with quarter of an hour to go and the hosts were denied a late winner with Szczesny deflecting a Darko Lazovic effort onto the crossbar.

Lazio’s European ambitions took a knock with a 2-0 loss at Bologna, days after a heavy defeat by Bayern Munich in the Champions League.

Ciro Immobile missed a penalty with goals in either half from Ibrahima Mbaye and Nicola Sansone sealing all three points for Bologna who snapped their 15-match winless league run against the Romans.

Inzaghi’s side showed signs of fatigue as they came off a 4-1 Champions League last 16, first leg loss to holders Bayern Munich.

“We must forget about these two defeats which hurt. An ambitious team like ours needs to roll up our sleeves and do better.”

Lazio have lost momentum since losing to Inter Milan in the league two weeks ago, and next host Torino before travelling to Juventus.

Last season’s European golden shoe winner Immobile had a chance to score from the spot after Joaquin Correa was tripped in the box with goalkeeper Lukasz Skorupski easily holding the striker’s weak effort.

And 11th-placed Bologna got the breakthrough two minutes later when Mbaye tapped in a rebound after Pepe Reina parried a Riccardo Orsolini volley.

Musa Barrow set up Sansone for the second after 64 minutes as Lazio’s 19-game league scoring streak ended, two short of their record run in 1956.

Lazio stay sixth on 43 points and could also be overtaken by Napoli on Sunday, while European rivals Atalanta travel to Sampdoria.