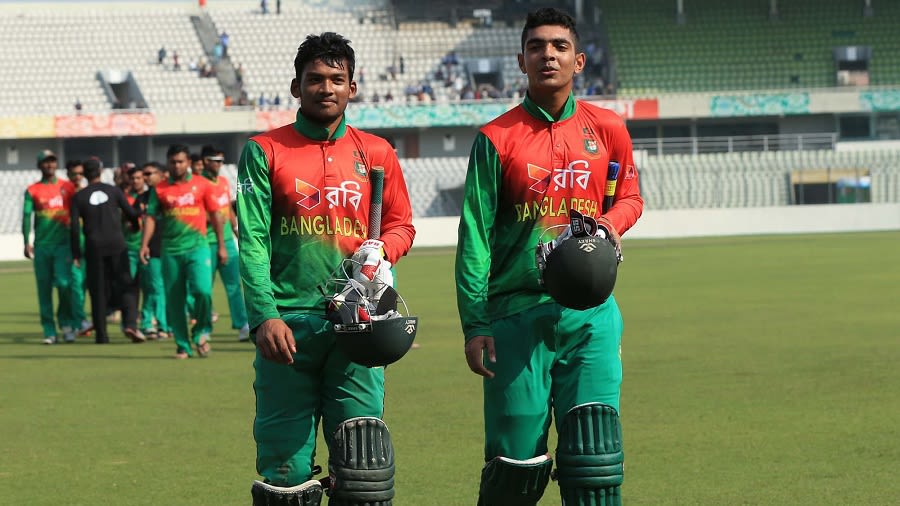 Saif Hassan played a captain’s innings to power Bangladesh Emerging Team to a six-wicket win against Ireland Wolves in the third one-dayer in Chattogram.

Hassan struck 120 off 125 balls, hitting eleven fours and five sixes, as he first played the enforcer and then anchored the 261-run chase.

Saif added 52 for the second wicket with Mahmudul Hasan, before putting on 68 for the fourth wicket with Towhid Hridoy.

Hridoy later added 69 for the unbroken fifth wicket stand with Shamim Hossain. Hridoy was unbeaten on 43 off 44 balls while Shamim, hero for the home side in the second game, blasted 44 off 25 balls, with seven fours and a six.

Earlier, Ireland posted 260 for 7 in 50 overs with Lorcan Tucker making an unbeaten 82 off 52 balls, hitting nine fours and two sixes. Meanwhile, Curtis Campher and James McCollum got out in their forties.

Paceman Mukidul Islam took 3 for 53 while Sumon Khan and Hridoy took one wicket each.

The match started at 11:00am, two hours after the schedule start, after a covid test on one of the local members of the visiting team’s support staff, tested positive for covid-19.

According to the BCB, the support staff had tested positive on Monday, after which further tests were conducted on the suspected person and close contacts.

However, the test results of all those individuals returned negative on Tuesday morning. Both teams had agreed to delay the match based on the results of those tests.

Sonic The Hedgehog Is Now A Club Mocchi Mocchi Plush