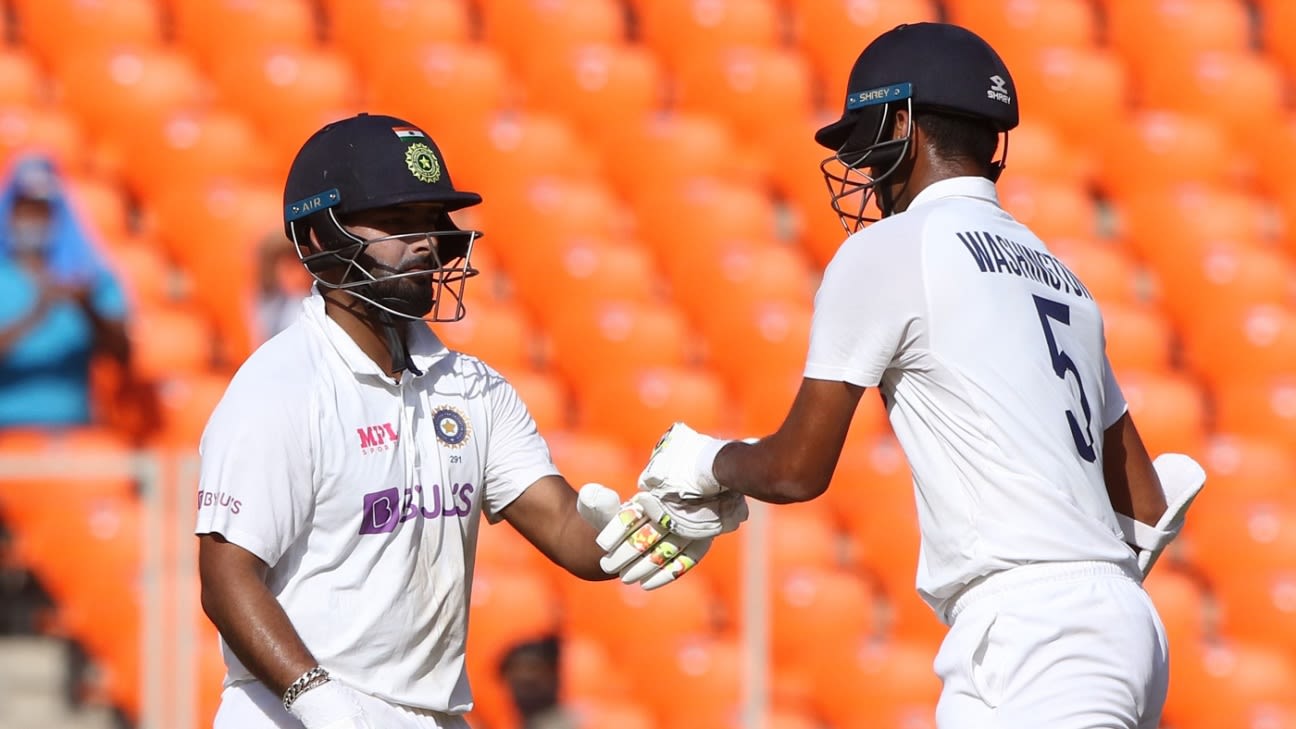 Welcome to day two of our live report of the fourth India-England Test from Ahmedabad. Join us for updates, analysis and colour. You can find our traditional ball-by-ball commentary here

*Most recent entry will appear at the top, please refresh your page for the latest updates. All times are local

With 31 ducks and counting, this has been the most quack-happy four-match series in Test history, reports my colleague Sampath Bandarupalli. Bairstow has made three of them in four innings, extending his grim run against India to 0, 6, 0, 0, 18, 0, 0, 28, 0. And with India’s spinners circling wounded prey, there’s every chance we could have a three-day finish here…

Grim stuff at the top of the order for England.

England might have sent off for some new moves, but they haven’t arrived yet! Fourth ball from Ashwin and Crawley nicks to slip, bringing out Jonny Bairstow… who steers obligingly to leg slip for a golden duck! Ashwin is amongst ’em, though Joe Root sees off the hat-trick ball without drama. England in serious danger of being taken out for a meal with Mr and Mrs Pain, here.

Well, at least Crawley’s not got out to left-arm spin this time. Marginal gains…

Right, what have England got in their locker here, then? Cracking innings from Rishabh Pant and, to a lesser degree, Washington Sundar shifted the paradigm of this Test… But have the English batsman got any new, powerful moves to show off? Given they’ve only once passed 200 in their last six innings, India might, in the words of Vince Noir, suggest their moves “are like being caressed with a natural yoghurt”. It’ll take a mighty boosh to set India a target, but that’ll be the aim as Zak Crawley and Dom Sibley head out after lunch. R Ashwin is straight on from the Reliance End to greet them.

England 205 and 6 for 0 (Crawley 5*, Sibley 1*) trail India 365 (Pant 101, Sundar 96*, Stokes 4-89) by 159 runs
Washington Sundar was left agonisingly short of a maiden Test hundred but his unbeaten 96 helped India to carve out a dominant position in the fourth Test. Although they eventually lost their last three wickets without adding to the score, by that stage their first-innings lead over England had swelled to 160.

The first 90 minutes of play had been conspicuously lacking in drama, as Sundar and Axar Patel calmly extended their eighth-wicket stand to 106. Both made Test-best scores against a toiling England attack but, with Sundar’s milestone almost in touching distance, the innings suddenly imploded.

It took a run-out to break the partnership, as Patel impetuously left his crease for a non-existent single to mid-on. His dive for the crease was in vain, and both players averted their eyes – perhaps sensing what might be to come. Ben Stokes immediately dispatched Ishant Sharma lbw and then three balls later castled Mohammed Siraj, leaving Sundar waiting for his moment despite the applause for a fine innings that helped give India control of the Test.

11.20am: Washington fails to cross the Delaware (or something)

Karthik Krishnaswamy writes: He was stranded on 85 in the first Test in Chennai, and now he’s stranded on 96. Imagine being Washington Sundar. He has the batting talent to make Test hundreds, clearly, and he’ll surely get one sooner rather than later if he gets a run of games. But here’s the thing: will he? He got his chance because of a freakish injury crisis, and he’s grabbed it brilliantly, but when Ravindra Jadeja and Hanuma Vihari return, where will he fit in India’s XI? He’s currently somewhere between those two: he has the skill and temperament to be a top-six batsman who bowls a bit of offspin, and his bowling has the potential for him to one day become a genuine allrounder. And he’s still only 21. The possibilities are endless, and he’ll get his chance again at some point, but he might have to wait a while. This is the last Test of this season, and after this is a long stretch of Test cricket in English conditions.

After two partnerships of over a 100 runs, India lose their last three wickets without adding a run as Washington Sundar is left stranded on 96*

A 160-run lead for India#INDvENG

Siraj can’t see out the over, never mind accompany Sundar to a richly deserved maiden hundred! Stokes pings his off stump third ball, leaving India’s 21-year-old No. 8 stuck at the other end on 96 not out. A mighty fine knock from Sundar, and it has put India well on top in this Test, despite the last three wickets falling for spit… but oh for four more runs!

Two in two balls, as Stokes traps Ishant with the plumbest of plumb lbws! Sundar is looking on from the non-striker’s end now, as Siraj heads out at No. 11. Can he hang on to get his mate over the line, as he did for Ashwin in Chennai?

Sundar hangs his head, Patel looks crestfallen, and England have finally found a way to get a wicket this morning! Clipped to mid-on and Patel went haring down only to realise his partner wasn’t moving… it’s tight, but Root did a deft job at collecting the throw and brushing off the bails in one movement. The partnership was ultimately worth 106 – only the third time that both the seventh and the eighth wicket have added 100 in Tests, notes stats guru Gaurav Sundararaman – but Patel’s departure means Sundar, on 96, needs one of Ishant Sharma or Mohammed Siraj to stick around for a bit.

It’s been a hugely composed innings from Washington Sundar, who is closing in on a maiden Test hundred in only his fourth match. From a wobbly position at 146 for 6, India have piled on more than 200 runs for the loss of one wicket and, given England’s form over the last three Tests, might even be beginning to think they’ll only have to bat once here…

This partnership has gone from minor irritance, certainly in the wake of being merked by Rishabh Pant, to major roadblock for England. India’s eighth-wicket has added more than 80 runs, the lead heading well beyond the manageable, never mind how well the pitch plays. Sundar continues to look the part as a batsman, equaling his Test best of 85 from earlier in the series, while Patel has quintupled his previous highest score of 7. Root finally brought himself on to bowl before the drinks break, but his malfunctioning four-man attack is being made to look even more of a selection error with every passing over.

Finally Axar making runs. Only so many times you can say he made 95 at the Riverside a moment before he’s out.

I’ll presume Jarrod actually means Sophia Gardens in Cardiff, which is about 300 miles from Durham – but yep, Patel has Champo runs under his belt, top-scoring in an innings win during a county stint in 2018 (he even managed to get a bowl and take a few wickets). Paul Collingwood is doubtless watching “wor canny lad” with pride from the England dressing room.

Just a couple of overs for Bess before he gets hooked, Joe Root seeking more control from his SLA Jack Leach… who is promptly whacked for two fours by Patel, a decent batsman who has a first-class hundred. Root’s problem here is that, while Leach has had a good series and is clearly the superior spinner, he averages 54.72 against left-hand batsmen in Tests, compared to 24.35 against righties. Bess averages 29.25 against southpaws (36.33 against right) – but can barely be trusted to land it right now.

So there’s your answer, boss.

Rishab Pant mauled him the first Test, but I am still baffled about how little Jack Leach has bowled to left-handers #INDvENG

England have started off with James Anderson and Dom Bess – a move perhaps designed to try and give their offspinner some confidence, with two left-hand bats at the crease in the shape of Washington Sundar and Axar Patel. But while Anderson started with back-to-back maidens, Bess conceded three boundaries in his first eight balls. A straight six from Sundar took India’s lead into three figures, before he threaded the gap through cover with an even-better shot.

The pitch, meanwhile, looks to be holding together nicely; tidy little footmarks, few obvious signs of disintegration and it’s playing well enough for the Nos. 8 and 9. Whether that’ll be the case when England come to bat remains to be seen.

9.35am: Should’ve Seen It Coming Dept

#AskMatchDay: Is Pant’s reverse lap the most extraordinary shot in Test cricket?

Well, that was a lot of fun, wasn’t it? Unless you’re an England bowler, perhaps. Rishabh Pant turned the game on its head with an extraordinary innings on day two, and he has put India in control of the Test. It’s not over yet, of course, but England have to get their heads back on if it’s not to be the defining contribution. Given their recent batting efforts, a 100-run deficit will loom large… but if we’ve learnt anything from India’s pocket rocket wicketkeeper, it’s that moments are there to be seized. Let’s go.