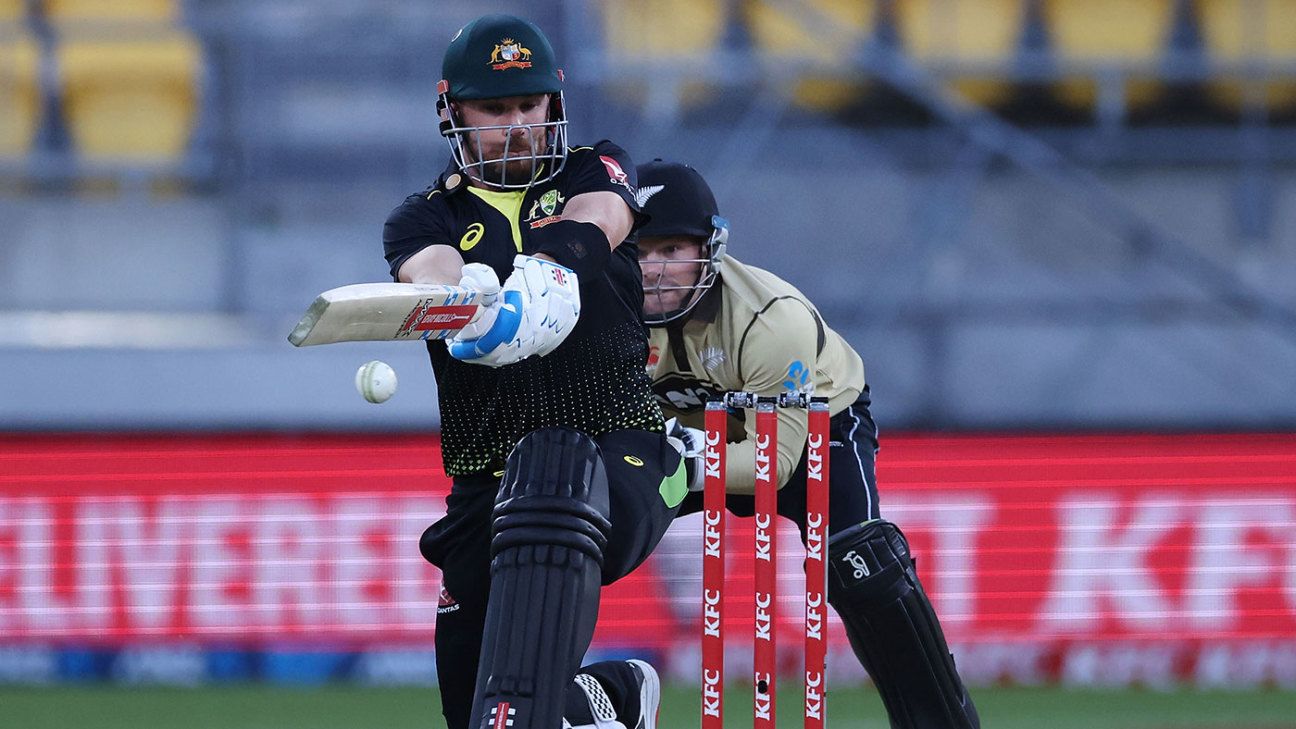 A crucial innings from captain Aaron Finch on a tricky pitch followed by a tight display in the field enabled Australia to take the T20I series to a decider in Wellington on Sunday as the home side’s batting disappointed for the second game running.

On a surface being used for the fourth time in three days (with two more matches to come) scoring was much tougher than when Australia put more than 200 on the board. New Zealand had control for the majority of the time in the field – Ish Sodhi and Trent Boult taking five wickets between them – but Finch took full toll on the final over of the innings as Kyle Jamieson was plundered for 26.

New Zealand were under pressure from the start of the chase and could not make a dent on the target in the Powerplay. Australia’s three spinners – Ashton Agar, Adam Zampa and Glenn Maxwell – produced combined figures of 11-0-49-6.

The signs were there early that scoring would not be as easy as the previous match when Mitchell Santner, who missed the previous game under Covid-19 protocols, was introduced in the third over. He removed Matthew Wade third ball, continuing the wicketkeeper’s unconvincing series, and immediately got turn from the surface. He would bowl his four overs for just 16 including 13 dot deliveries, highlighting what New Zealand had missed on Wednesday.

Boult and Sodhi did the damage to the middle order as Australia struggled to increase the tempo. Boult removed Maxwell just when he was threatening something destructive again and produced a terrific yorker to extra Agar who had been prompted to provide a left-right combination. With Sodhi took his third wicket, removing Mitchell Marsh to a top-edged sweep, Australia were in trouble at 116 for 6 heading into the closing overs.

At the start of the 18th over, Finch was 41 at a run-a-ball. He had been starved of strike for significant parts of the innings and the nature of the surface made strokeplay difficult. However, by hanging in it meant that Australia had a set batsman for the closing overs. He went to a half-century off 47 deliveries and then it was the final over where he really made it count against the struggling Jamieson who has now conceded 175 runs in the series. The day after Kieron Pollard had taken six sixes off an over, Finch managed four – the first two over and then a brace over the leg side. A player who had been under scrutiny just a few days ago had made back-to-back crucial contributions.

Finch was quick to follow the spin playbook, handing the first over of New Zealand’s innings to Agar – fresh off his six-wicket haul in the third game – and he went for just a single to set the tone. Agar would end up bowling three of the Powerplay overs, conceding just seven runs, and in that third over he removed the key figure of Martin Guptill who tried to clear the off side but was superbly caught by Maxwell who showed some neat footwork to stay inside the rope. When Riley Meredith went for just two in the sixth over, New Zealand were stalled on 25 for 1 with Tim Seifert having used up 21 balls for 15.

Having soaked up so many deliveries, Seifert had to play the Finch-type innings but his difficult stay was ended when he chopped on against Kane Richardson as the asking rate climbed over 10 an over. Williamson rarely does ugly at the crease, but was caught at point off the back of the bat as he attempted to sweep Maxwell whose offspin proved highly valuable. It quickly became a forgettable performance from the home side with Glenn Phillips and Devon Conway ending up at the same end in a mix-up. In a way, though, New Zealand’s defeat is a good thing because with the relaxation of Covid-19 alert levels tomorrow a crowd is now able to attend Wellington on Sunday. They have a decider to enjoy.

The league also said that its six