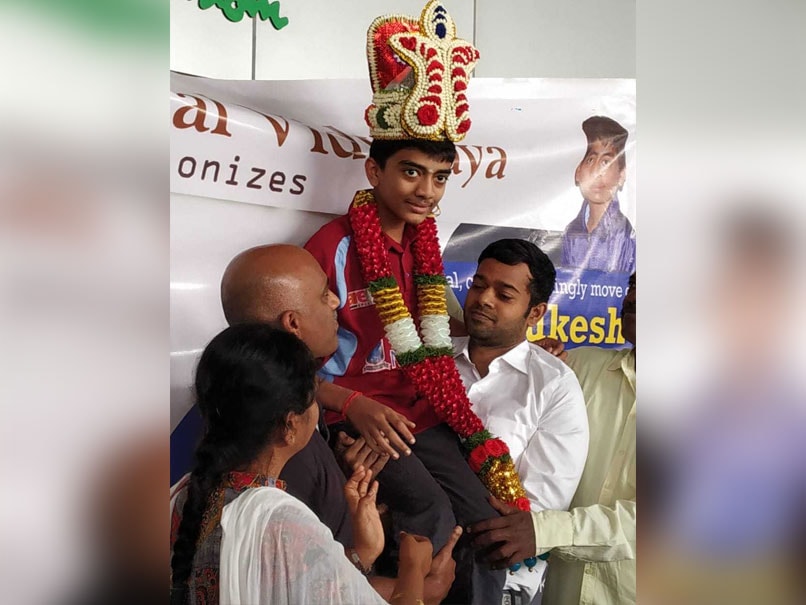 
Parents of India’s youngest Grandmaster, 12-year-old Gukesh, have sought government help to groom their son to become a world chess champion. The class seven champion and his doctor parents who received a warm welcome at the Chennai airport said that they have exhausted all their savings. His father, an ENT specialist, said Gukesh travels three weeks in a month and he has had to give up his full-time practice and take up visiting consultation during his free time to help his son.

“After this level we need to travel to many tournaments and give him intensive training. Government help would be good. We have spent all our 10 years of savings. We are running the show with my wife’s income,” Gukesh’s father told NDTV.

Since 2017, Gukesh’s school and a corporate have been helping the prodigy monetarily.

A soft spoken Gukesh has also made many sacrifices. He skipped classes for two years.

Gukesh said that his school and another corporate have been very supportive and encouraged him with monetary contributions as well.

“I want to improve my chess levels and rankings. Of course, my ultimate aim is to become a world champion. I work a lot. My present coach Vishnuprasanna sir helps me so much,” said the 12-year-old Grandmaster.

With chess being his main focus, Gukesh still manages to find some time for fun.

“I play badminton with my mother. I watch films too.”

His role models he says are “Bobby Fischer and Vishy (Viswanathan) Anand”.

Gukesh’s mother said that she has never had second thoughts about encouraging her son’s interest in chess.

“There was no question of cricket vs chess at all. I always wanted him to become good in chess. We just wanted to nurture his passion for chess,” said Gukesh’s mother.

On January 15th, the Chennai boy defeated Dinesh Sharma in the ninth round of the Delhi International Open GMs chess tournament for his third and final GM norm.

In the past, he has defeated some big names including Nigel Short, former world championship challenger at Bangkok Open, Aleksandrov Aleksej No.3 player in Belarus and Aleksandra Kostenuik, former women’s world champion.