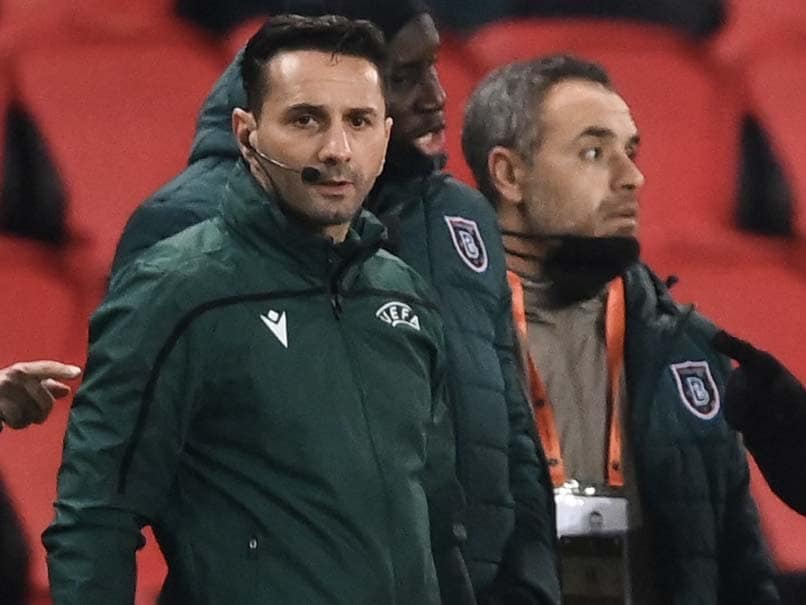 
A match official in the December Champions League game between Paris Saint-Germain and Istanbul Basaksehir that was suspended after allegations of racism has been banned for the rest of the season for “inappropriate behaviour”, UEFA announced on Monday. Sebastian Coltescu, from Romania, was banned from carrying out “any referee’s function until the end of the 2020/21 season, i.e. until 30 June 2021” but was not found to have breached UEFA articles covering racism and other discriminatory conduct.

The group-stage game was stopped in the 14th minute, and then finished a day later, after a touchline argument erupted over accusations Coltescu, who was the fourth official, had described Basaksehir’s Cameroonian assistant coach Pierre Webo as “black”, or “negru” in Romanian.

Coltescu was also ordered to attend an educational programme along with assistant referee Octavian Sovre. The latter avoided a ban but did receive a reprimand for inappropriate behaviour.

The entire Romanian team of officials were replaced for the restarted game by a new refereeing team headed by the Netherlands’ Danny Makkelie.

Television microphones in the empty stadium — the match took place without spectators because of Covid-19 restrictions — picked up the argument, as a furious Webo repeatedly asked why a racist term had been used to describe him.

In the exchange in question Coltescu said: “The black one over there. This is not possible. Go and identify him. That guy, the black one.”

In its statement on Monday, European football’s governing body said that “officials should be adequately and specifically trained to make better decisions on the choice of language and words to be used in UEFA competitions”.

It added: “In the international context, correct use of language is essential to avoid situations such as those that occurred in the above-mentioned match.”

Webo had been shown a red card before the incident erupted and was given a one-match suspension for unsporting conduct.

UEFA said his sending-off occurred before the incidents “and was therefore not provoked by them”.