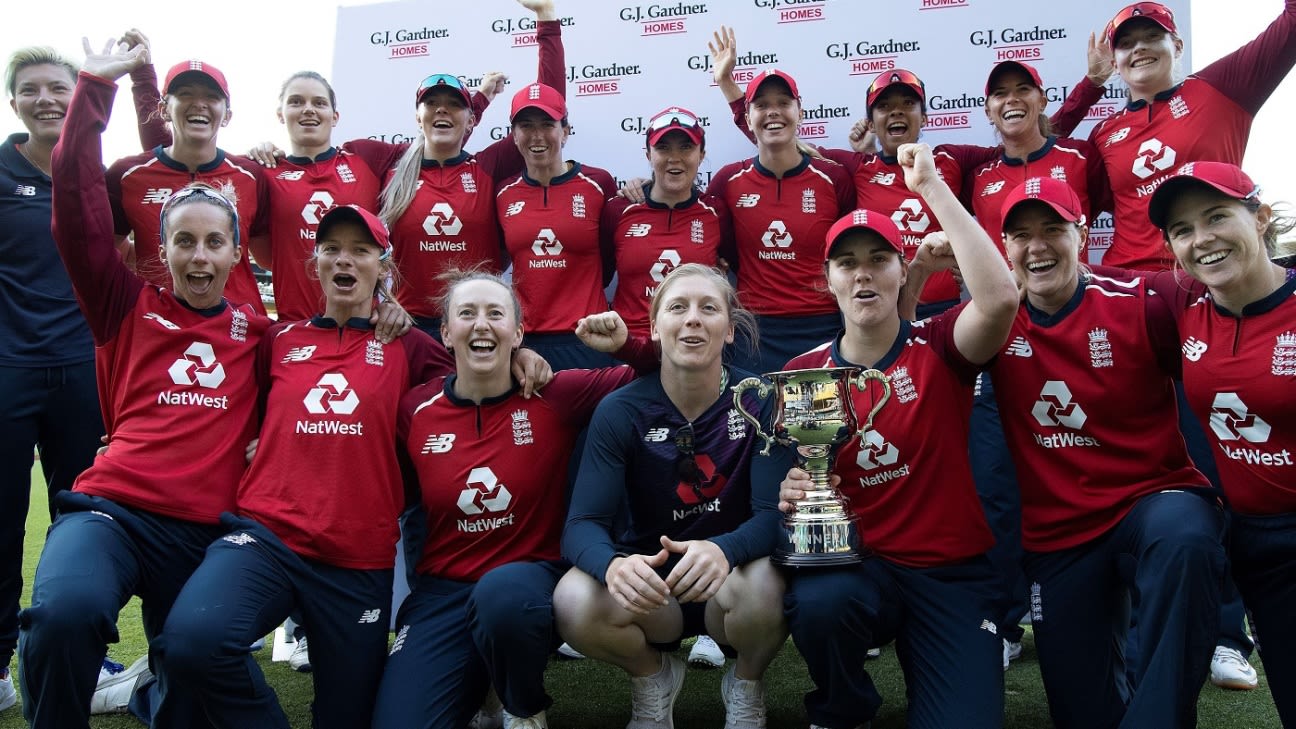 Natalie Sciver thoroughly enjoyed a first taste of international captaincy, saying her side made the job easy as she oversaw England’s 3-0 sweep of the T20I series against New Zealand.

When Anya Shrubsole was ruled out with a knee injury, Sciver was handed the role of vice-captain for the tour, to glowing approval from regular captain Heather Knight, who said at the time: “There’s no doubt Nat is a huge leader in the group for us.” When Knight was ruled out of the final fixture because of a hamstring problem, Sciver had to bring her leadership skills to the fore and she relished the opportunity as England sealed a 32-run victory over New Zealand with 12 balls to spare on Sunday.

“Sign me up for some more games,” Sciver beamed. “It’s been brilliant. With everyone contributing like that, it’s an easy game.

“Yesterday, Heather pulled up not so well after the last game, so I found out yesterday [that I would be leading the team today]. I had a maybe a sleepless hour when I was trying to get sleep but as soon as the warm-up was done I was all right.”

Having gone 2-0 up in the preceding ODI series, England were disappointed to have dropped the third game, which New Zealand won by seven wickets, and the tourists set their sights on sweeping the T20s.

Tammy Beaumont carried on her excellent form from the ODIs, where she was the leading run-scorer, to be named Player of the Series for the T20s, again topping the run-scoring charts with 102 at an average of 34.00 and strike rate of 100.99. But when she, fellow opener Danni Wyatt and Sciver all fell cheaply on Sunday, two players trying to establish themselves as regulars in the team shone with the bat.

Fran Wilson, playing her first match of the series, top-scored with an unbeaten 31 off 23 and Sophia Dunkley, coming in a No.4 where Knight would normally be, added a valuable 26 off 29 deliveries. Dunkley did not bat in the first match as England won by seven wickets and was not out on nought when they won the second by six wickets.

“As soon as she heard the news, she was a bit shocked,” Sciver said of the moment Dunkley learned she had been promoted up the order from No. 6. “But then I think she managed to get her head around it.

“It does get harder in T20 when you go in at five, six and seven, where you might only have two balls or ten balls or whatever it is. So, yes, it’s great for her to get a chance and really show us that she can do it.

“It’s so hard to go through a tour when you’re not sure if you’re going to play and then you don’t really get the opportunity to bat in the game… Fran was really key, to be in at the end was was brilliant, so she took on her role really well.”

But it was England’s bowling contingent who were most impressive in the final match, with six different bowlers among the wickets as New Zealand were bowled out for 96 in 18 overs in reply to England’s 128 for 9. Young offspinner Mady Villiers claimed career-best figures of 3 for 10 from two overs, but Katherine Brunt was named Player of the Match after dismissing both openers, Sophie Devine and Hayley Jensen, for ducks in the first over of New Zealand’s chase before finishing with figures of 2 for 19 from four overs.

Sophie Ecclestone ended with identical match figures to Brunt, while Freya Davies, Sarah Glenn and Sciver all chimed in with a wicket each.

Sciver said Brunt, her fiancee who returned after missing the second match with a head cold and ended the series with four wickets at an economy rate of 4.17, had been bowling as well as she had done for some time.

“She has been brilliant,” Sciver said. “She’s been terrorising people in the nets. You don’t want to sign up to face her at training sessions, so it’s great for her to get some reward out there on the pitch.

“Sometimes she doesn’t quite have the luck go with her, or the decisions, so I’m really pleased that she managed to, throughout the tour, pick up wickets where she can and today was really important for us and she did the job.”

Villiers had only bowled four overs across the first two matches for one wicket, so Sciver was happy about her return as she continues to forge a three-pronged spin attack with Glenn and Ecclestone.

“It’s so good, just to have a legspinner, a left-arm spinner and an offspinner who all have got amazing talent and can come in and do a job for us at any point,” Sciver said. “Mady’s had to wait her turn a little bit but she did brilliantly today.”

Valkerie Baynes is a general editor at ESPNcricinfo

What Would Make A New Nintendo Switch “Pro” An Essential Upgrade?