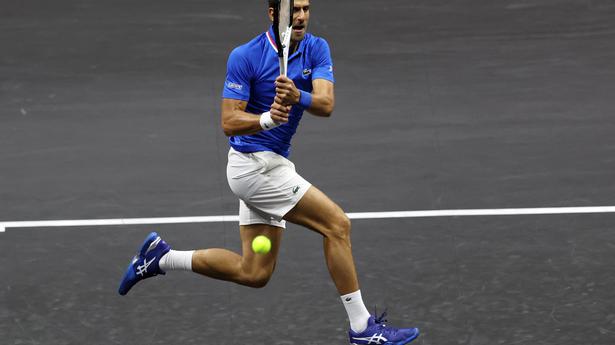 Novak Djokovic produced a stunning performance to thrash Frances Tiafoe in his first match since winning Wimbledon in July to edge Team Europe ahead in the Laver Cup on Saturday.

With Roger Federer watching on from courtside at a sold out O2 Arena, the day after his emotional farewell match alongside Rafa Nadal, Djokovic returned to action in spellbinding fashion.

U.S. Open semi-finalist Tiafoe was helpless to stop the Djokovic onslaught as the Serb won 6-1 6-3 to put Bjorn Borg’s Team Europe into a 6-4 lead overall.

Former world number one Djokovic was due back on court later to partner Italian Matteo Berrettini in a doubles against Team World pairing Jack Sock and Alex De Minaur.

After Federer’s tear-jerking final match the previous night, day two could have been something of an anti-climax but the quality of the tennis, and the presence of Swiss great Federer on the bench, ensured a compelling day of action.

But American Taylor Fritz drew Team World level at 4-4 in the day’s second match with a tight win against Briton Cameron Norrie — a stand-in for Nadal who left earlier in the day for personal reasons.

Fritz won 6-1 4-6 10-8 as John McEnroe’s Team World showed that they are made of sterner stuff this year having been trounced 14-1 last year in Boston.

Federer, watching every ball along with the rest of his Team Europe colleagues including Andy Murray, did his best to lift Norrie with some words of wisdom.

At one point Federer suggested world number eight should serve and volley, which Norrie promptly did but lost the point as Fritz sent a lob over his head.

“If Roger Federer is telling you to do something, there is no chance I’m not going to do it, especially out there playing for Team Europe,” Norrie said later.

Djokovic’s decision to not have a COVID-19 vaccine meant he was not allowed to play in the U.S. swing and Spanish teenager Carlos Alcaraz took full advantage to win the U.S. Open and take over as the new world number one.

But Djokovic issued a statement of intent as he picked up where he left off when beating Nick Kyrgios on Wimbledon’s Centre Court to reach 21 Grand Slam titles.

Not even Federer could have improved on a first set in which Djokovic did not drop a point on serve and landed his precision groundstrokes near the lines with relentless regularity.

Tiafoe went a break down early in the second set but gained some traction to push back hard and had a break point that Djokovic repelled in masterful fashion.

Djokovic then wrapped it up in little more than an hour.

“I haven’t played for a few months so happy to continue the run, it was a pretty decent match from my side, I have to say,” Djokovic said on court.

Djokovic then paid tribute to Federer’s emotional finale the previous night. “It was one of the most beautiful moments I’ve witnessed in my life,” Djokovic said.

Individual matches were worth one point on Friday, two on Saturday and three on Sunday. Thirteen points are needed to claim the trophy.