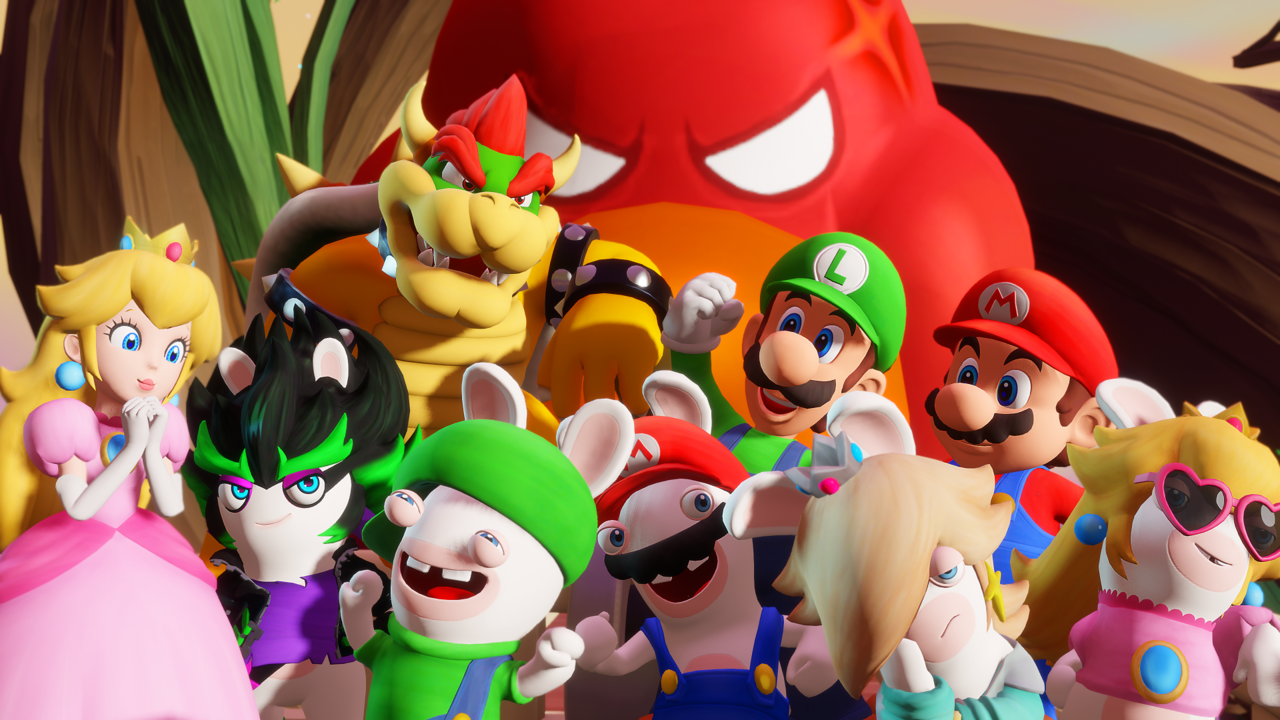 Though Mario + Rabbids Sparks of Hope builds on the core idea of its predecessor, Kingdom Battle, its formula makes some big departures too. Most notably, Sparks of Hope outright transforms the flow of combat, dropping the grid-based movement and strict action economy of Kingdom Battle to incorporate a wider variety of meaningful choices that you can make for each character on their turn. The result is a combat experience that feels akin to what you might find in a tabletop roleplaying game like Dungeons & Dragons, where movement economy (all available movements) and action economy (every possible action) influence one another.

Taking place after the events of Kingdom Battle, Sparks of Hope sees Mario, Luigi, Princess Peach, Beep-0, and their new Rabbid friends banding together to defeat a mysterious monster known only as Cursa. To do so, they’ll have to partner up with various Sparks–a fusion of Lumas and Rabbids–and travel to a variety of planets throughout the galaxy, where they’ll run into and also team up with Rabbid Rosalina, Bowser, and a mysterious Rabbid that only goes by Edge. Like its predecessor, Sparks of Hope is a turn-based strategy adventure game, where the heroes and villains take turns moving through a self-contained stage and shooting at each other.

I got the chance to play a good three hours of Sparks of Hope at a preview event, which included the game’s prologue, first world, and a later world partway through the game. I really enjoyed my time with Sparks of Hope–the far-more-cinematic direction to the plot and further personalization of the Rabbids inject a lot of fun charm into the story. I’m especially fond of Rabbid Peach, whose voice actor does a marvelous job of dripping hilariously stereotypical mean girl energy into every line, but the eternally mopey and lazy Rabbid Rosalina is also amusing. Beep-0 is a bit annoying–and based on their know-it-all personality, I think that’s exactly what Ubisoft Milan and Ubisoft Paris are going for–but I otherwise really like all the characters this go around.

But it was the gameplay that really stood out to me, which emphasizes the importance of movement in tactical combat. In most cases, turn-based strategy games separate the movement economy and action economy. Every character has a collection of actions they can take, as well as a limited amount of movement per turn. And while one economy can affect the other–like a character moving towards an enemy to get them in range for an attack–the two generally do not mix. When they do mix, it’s almost always in the form of an action complimenting movement–like an attack that moves a character closer to their target, or an ability that makes a character invisible. However, it’s rarer for these types of games to have movement influence the action economy, allowing you to take special actions by moving. This results in a lot of tactical turn-based games where movement is the most boring part of combat, as it’s just how you go from Point A to Point B.

When I spoke to Mario + Rabbids Spark of Hope associate producer Quentin Correggi, he told me that the development team got a lot of positive feedback in regards to Kingdom Battle’s movement economy. And so when it came time to make a sequel, the team decided to double down and further build upon it.

“People really enjoyed everything that you could do during your movement,” Correggi told me. “In Kingdom Battle, I think [movement] was what really set us apart from other games–you could do so much in your movement phase. You could dash into enemies, team jump, take a pipe, [hide behind] cover, cover lots of ground, etc.–it has always been at the core of our combat experience.”

Sparks of Hope ditches grid-based movement, creating more opportunities to use your movement in creative ways. On their turn, all characters can move, use pipes, leap off allies to hover to another spot, dash through an enemy to damage and trip them up, parkour over low cover, and hide behind cover. Several characters have unique movement actions too. Mario, for instance, can enter a slow-mo bullet-time while in midair to snipe two targets with his twin pistols, and Edge can be upgraded so that she can perform three dashes in a single movement. Plus, rescued Sparks can be equipped to your characters, unlocking even more abilities for your characters on top of what they can already do (like adding fire damage to a dash).

And since there’s no order of operations to the action economy, you have a surprising amount of agency every turn in how and when you use your movement. You can, if you want, move to dash through an enemy, use an item, and then move again to jump off an ally and hover to a new spot, and then finally attack. And you can switch up who you’re directing at any point, compounding the sheer possibility of strategies you can achieve in a single turn of combat. You don’t have complete freedom, as there are a few limitations within this framework that you’ll have to consider. First off, even if every character can take any of their actions that they want and in whatever order they want, they’re limited to only two actions per turn. And second, once a character takes their attack action, they can no longer use any of their movement. A character can still use their full movement economy after using an item, their special technique, or one of their two Spark abilities, though.

As Correggi explains it, that second rule is to ensure that players still prioritize reaching cover as part of the tactical experience of combat. Originally, the game didn’t have that second consideration, allowing players to easily direct their characters out of cover to attack enemies and then retreat back to cover in the same turn, unintentionally transforming strong close-range fighters like the shotgun umbrella-wielding Peach and combat gauntlet-toting Rabbid Mario into devastating hit-and-run specialists.

“The positioning needs to be a very strong commitment,” Correggi said. “You need to make it part of the strategy. If you can just move around, attack, and go back, then there is no meaningful choice. We realized that we need to put boundaries. …So then we tidied it up and at the end, we came up with the situation that we have now, which works very well because you are already free to move around and use your Spark. So [your character’s] technique, their items–you can still move around after using them. The real commitment is your attack. You really need to think about where you will attack.”

I like this structure, as it encourages you to pay more attention to what sort of movement options you have first. That’s where the real-time elements really come into play, as many allow you to use your movement to attack enemies. Dashing through a Bob-omb will ignite its fuse, for example, giving you precious little time to pick it up and throw it before it explodes. It’s a risky maneuver, but one that gives you a whole extra area-of-effect attack. Some stages have elemental hazards as well, like fans that will intermittently turn on and blow any unprotected creatures off the map and into oblivion. In those cases, your movement is tied to both your survival and that of your enemy–you need to be wary of the fans on your turn and conscious of how you can move about the map to get the fans to blow away your opponent.

The greater movement economy isn’t the only big change in Sparks of Hope. The game also kicks off with you having a wider option of characters to choose from. Kingdom Battle sees you begin with only Mario, Rabbid Peach, and Rabbid Luigi, with more characters joining your party throughout the story. But in Sparks of Hope, you can form your party of playable characters from an initial pool of six–Mario, Luigi, Peach, Rabbid Mario, Rabbid Luigi, and Rabbid Peach–and you unlock a seventh option, Edge, after completing both the prologue and first area. You just have a lot more choice earlier on.

“We wanted to give that freedom and agency to the player as soon as possible,” Correggi said. “So it was really important for us to give as much as possible, but just to be sure that the player is not overwhelmed. Which is why, for example, at the very beginning of the game, you only control two characters instead of the standard three. It’s perfect because you still have the synergies between your two characters, but at least the amount of abilities and actions that you can perform and the complexity between them, the depth is a bit reduced. So you can onboard properly and get familiar with your characters and the combat rules.”

It’s a lot to keep track of and experiment with but, man, it all results in an incredibly fun game that I cannot wait to play in full. Every battle felt like an opportunity to switch things up and try something new in order to further refine how to get the most out of my movement and each character’s unique skillset–even after the whole three hours I had, I still left the preview event thinking about how I hadn’t gotten the chance to try absolutely every combination available. Sparks of Hope is definitely a game to look out for, coming to Switch on October 20.