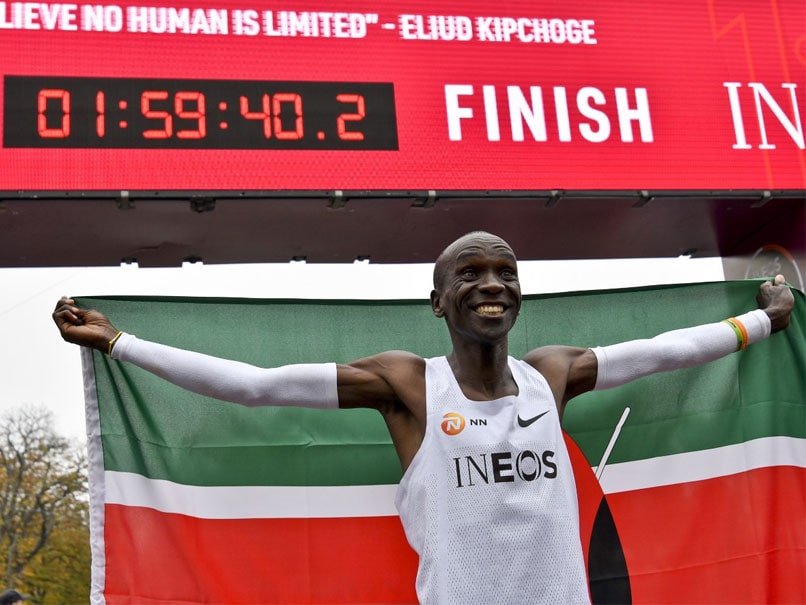 Lasers, Rabbits And New Nikes: How The 2-Hour Marathon Barrier Was Broken


After a stunning weekend of history-making marathons, runners around the world laced up their shoes this week with a new sense of just how fast a human can go. In winning the Chicago Marathon on Sunday, Brigid Kosgei of Kenya shattered the women’s marathon world record by more than a minute, clocking an unofficial time of 2:14:04. One day earlier, her fellow countryman Eliud Kipchoge broke the two-hour marathon mark during a special event in Vienna when he finished the 26.2-mile course in 1:59:40. That effort did not come in an open race and will not count as a world record.

Kipchoge’s run, in particular, touched off a wave of excitement since the two-hour marathon barrier was long seen as unbreakable.

“Kipchoge’s dominance at the marathon is as if the New England Patriots won seven out of the last eight Super Bowls – that’s how good he is,” said Steve Magness, a performance coach for professional runners who also heads the University of Houston’s cross-country team.

The 34-year-old Kipchoge, the 2016 Olympic gold medalist, already holds the official marathon world record of 2:01:39, which he set last year at the Berlin Marathon.

But his feat has also sparked debate: Unlike Kosgei’s record, which was set during a race in which she lacked control of most variables, Kipchoge achieved his historic time under meticulously engineered conditions, including a laser-beaming pace car, a wind-breaking phalanx of pace-setting runners known as “rabbits” and a pair of controversial, performance-enhancing Nike racing shoes. (Kosgei was also wearing a prototype of the shoes during her Chicago Marathon win.)

The sub-two-hour marathon time was part of the INEOS 1:59, a special speed challenge put on by the British chemical company of the same name.

To be a records-eligible course the race must adhere to stricter rules around pace-setting, its design and even drinks. (Runners can be disqualified for sipping anything but drinks picked up at a designated aid station.)

“It was singularly designed for [Kipchoge], so it was built around him. They basically throw the rules out,” said Carey Pinkowski, who has served as race director for the Chicago Marathon for 30 years.

The Chicago Marathon is known worldwide as one of the fastest courses because of its flatness, wind-neutralising design and the relative mild weather. Pinkowski said similar factors were at work in the course set out in Vienna: flat, near sea level and shielded from wind and harsh sun thanks to a canopy of trees.

To break the wind, a group of elite pacesetters ran around Kipchoge in a reverse-V formation. Forty “rabbits,” as pace setters are known, rotated in and out so that each rabbit who rotated in was on fresh enough legs to keep Kipchoge’s sub-4:34 minute pace.

As Magness, the performance coach, noted, these weren’t just any runners, either.

“It’s like if you played a pickup football game and everyone is an NFL star. You had Olympic medalist athletes pacing him,” Magess said. “If you took the best NCAA runner, they could maybe make it 20 to 25 percent of the way. To even be able to pace this, you have to be the best in the world.”

Keeping up is only half the battle, Magness added. Pacing requires precision, with even elite pacers fluctuating by five seconds faster or slower than the target pace. Magness said while that may not sound like a big deal, at the elite level, a five-second variance over 26.2 miles can be the difference between a world record and finding yourself completely out of gas – what’s known in marathon running as “hitting a wall” or “bonking.”

The pacers themselves were guided by a pace car that projected a green laser that strategically indicated where on the road they should run for the shortest possible distance. Magness said a course is measured in the shortest distance a runner could travel and that a runner moving from side to side or the outer edge of turns will inevitably add distance.

Then there were the shoes. Like aerobars in competitive cycling, clap skates in speed skating or Speedo’s LZR Racer suits in Olympic swimming, Kipchoge’s gear, the Nike ZoomX Vaporfly Next%, were a legal, if not controversial, performance enhancement.

“Normally I don’t like to fall for marketing stuff, but if you look at the research and data, the shoes seem to have a big effect,” Magness said.

Mike Joyner, a Mayo Clinic faculty member who for years has studied human performance in relation to breaking a two-hour marathon barrier, agreed that the shoe criticism shouldn’t detract from Kipchoge’s achievement.

“There’s a lot criticism over the shoes, but the shoes are hiding in plain sight. Back in the late ’70s, people at Harvard designed an optimized track and runners ran 2 to 3 percent faster. The same principles are in this shoes, which maximize recoil properties in the human leg.” Joyner said.

Some reactions to Kipchoge’s feat – or rather, the conditions that facilitated it – have been less rosy. On Sunday, The Atlantic characterized sub-two-hour marathon time as the “Greatest, Fakest World Record.” The piece quoted British sports scientist Yannis Pitsiladis, known in the racing community for his effort to design a training program that would help an athlete break the two-hour marathon barrier, as dismissing the INEOS 1:59 Challenge as a marketing gimmick. “I can’t get excited about this,” Pitsiladis told the Times of London. “It’s meaningless.”

“All large sporting events are manufactured. People can be purist about it, but I think it’s kind of whiny,” Joyner said. “Yes, [Kipchoge] had the course and the support, and the weather and the gear. Nevertheless, you go out and run 26 miles at four minutes and see how it feels.”

As much as Kipchoge had the benefit of ideal conditions, Joyner said the number-one-ranked marathon runner is considered a once-in-a-generation talent. And despite gradually falling marathon times, crossing the two-hour barrier wasn’t always a given.

Men’s marathon times dropped by minutes each decade until about the 1960s, according to Joyner.

“What happened is people went from running 30 to 40 minutes to more like 100 miles per week, and training year round,” he said.

The talent pool and competition improved, and races were more professional, but times weren’t sinking as sharply, cementing the mythical status of the two-hour marathon time. From Australian Derek Clayton’s sub-2:09 marathon time in Antwerp in 1969 to Kenyan Abel Kirui’s 2:05:04 in Rotterdam in 2009, “it took 30 years to take off three minutes,” Joyner said.

(Joyner notes that for women marathoners, who were barred from most major races until the mid-1970s, the experience was compressed, and times grew more competitive at a faster rate. “It didn’t take them 50 years like the men did to figure out how to train.”)

Now that the barrier to something long thought impossible has fallen, Joyner said the human race may have to wait another lifetime before the next big milestone.

Sonic The Hedgehog Is Now A Club Mocchi Mocchi Plush