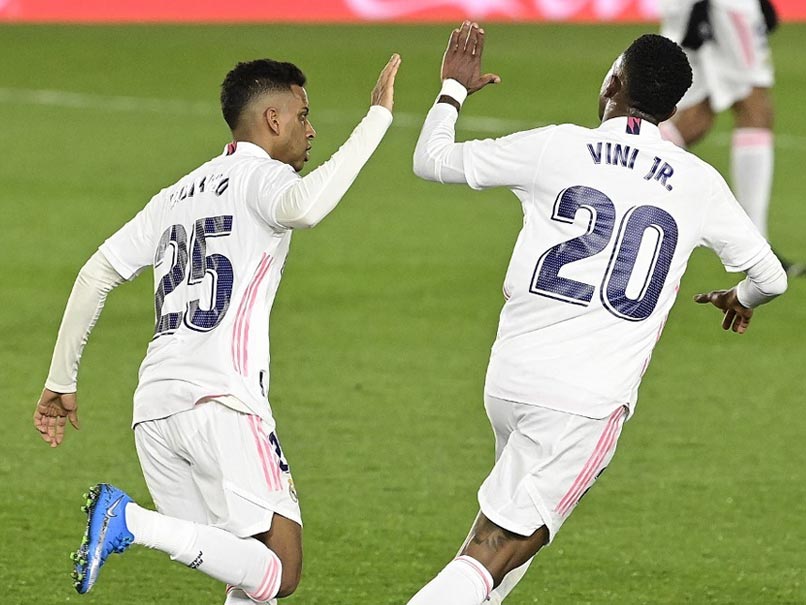 
Real Madrid’s chances of chasing down La Liga leaders Atletico Madrid were dealt a blow on Monday as they needed a late Vinicius Junior equaliser to secure a 1-1 draw with Real Sociedad. It could have been worse for Zinedine Zidane’s side, with Vinicius’ finish in the 89th minute preventing what would have been a damaging defeat after a weekend in which both Atletico and Barcelona had won. Atletico’s victory over Villarreal on Sunday put them six points clear of Real Madrid, an advantage that is now only cut to five ahead of next week’s Madrid derby at the Wanda Metropolitano. Atletico also have a game in hand.

The result ends Real Madrid’s run of five consecutive wins while Portu’s brilliant header for Real Sociedad early in the second half was also the first goal conceded by the reigning champions in five games.

It represents an important shift in momentum. A few days ago Atletico might have hoped just to hold on to first place next weekend but now they could spy an opportunity to all but knock their opponents out of the title race.

“We’re playing for a lot there,” said Real Madrid goalkeeper Thibaut Courtois. “We can win, we’re physically strong and we’re getting players back. There’s a lot of time left to keep fighting in La Liga.”

Barcelona kept their own resurgence going on Saturday by overcoming Sevilla and now sit level on points with Real Madrid, having also played one game fewer than the leaders. Real Sociedad sit fifth, the top four seemingly out of reach.

Madrid had 20 shots to Real Sociedad’s six but lacked edge in the final third, with the injured Karim Benzema watching on from the stands.

“We’ve had games where we won and maybe we didn’t deserve to win as well, we can’t change anything,” said Madrid coach Zidane. “We have to keep going. There is a long way to go.”

Benzema could return for the derby and one positive for Zidane was the sight of others returning, with Fede Valverde, Marcelo and Rodrygo all back in his squad.

“Karim can be with us, yes, we’re going to see,” said Zidane, when asked about the striker’s chances of facing Atletico.

“Still, he hasn’t trained with the team but the problem is a lot better, tomorrow we’ll analyse him.”

Madrid had the better chances in an entertaining first half, the best of them falling to Mariano Diaz at the back post but he headed against the crossbar under pressure from a yard out.

Toni Kroos and Marco Asensio both went close and Real Sociedad were dangerous on the break, just unable to find the final pass to make their openings count.

They made it count 10 minutes into the second half, the ball quickly shifted through midfield and out to the left, where Nacho Monreal had time to launch a cross to the back post.

Ferland Mendy looked like he would clear but instead was caught under the ball, allowing Portu to jump and send a brilliant header across Courtois and into the net.

Madrid’s pressure would come but Real Sociedad could have made it two, only for Alexander Isak to fall just short of Mikel Oyarzabal’s pass across.

Zidane sent Vinicius, Rodrygo and Hugo Duro on and there were chances. Casemiro and Duro both missed headers while Rodrygo skewed wide before Vinicius struck one minute from time, steering in Lucas Vazquez’s cross when given space in the box.

Duro even had a chance to win it but headed over, Real Sociedad surviving for a deserved point.