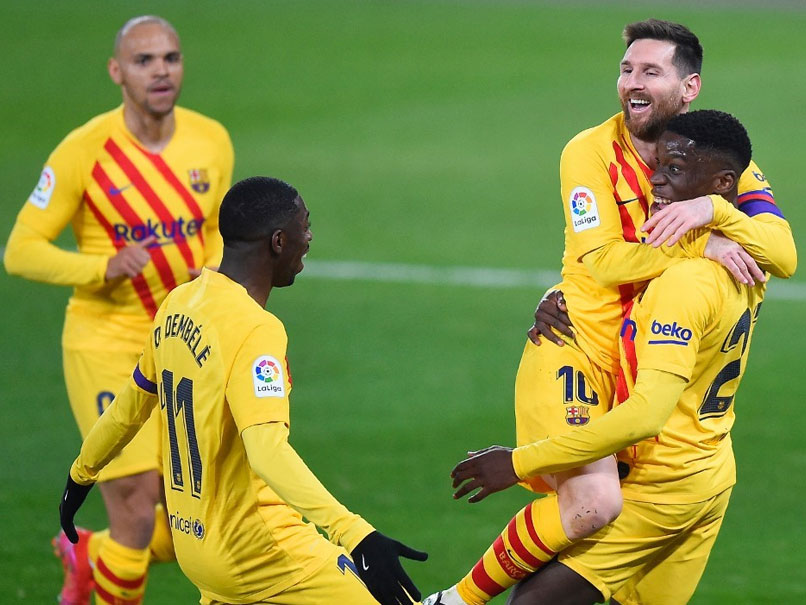 
Barcelona cranked up the pressure on Sunday’s Madrid derby by beating Osasuna 2-0 on Saturday night to edge two points behind leaders Atletico Madrid in La Liga. Lionel Messi set up both goals in Pamplona as Jordi Alba hammered home in the first half before the 18-year-old Ilaix Moriba came off the bench to curl in an impressive shot late in the second. “Thankfully Leo gave me the pass and I don’t know how I cut in and shot with my left foot, I’m just glad it went in,” Ilaix said. “I will never forget it, I will take that goal to my grave.”

Ilaix’s strike was his first goal in La Liga and another breakthrough moment for a Barca youngster, 24 hours before the club hopes a brighter future can begin under a new president.

Before the winner of the elections — contested by Joan Laporta, Victor Font and Toni Freixa — is confirmed on Sunday night, Atletico will face Real Madrid at the Wanda Metropolitano, where Barcelona will surely be hoping for anything other than a home win.

A few weeks ago, Ronald Koeman’s side looked too far adrift in the title race but 10 victories out of 11 have shot them back into contention, even if Atletico remain in the driving seat with two games in hand.

“Any result is good for us,” said Koeman.

After coming from two goals down to beat Sevilla after extra-time in the semi-final of the Copa del Rey on Wednesday, Barcelona now have one trophy, and perhaps even a domestic double, in their sights.

Their success in recent months has owed much to a talented crop of youngsters, with Ilaix — a dynamic but technically gifted midfielder — the latest to emerge.

“Every time he comes into the team he gives the team something extra,” said Koeman. “Because of his personality, his energy, most of all he’s good with the ball, and physically he’s a strong boy. He’s gaining ground and showing he can be more with the first team.”

Barca faced some nervy moments early on as Jonathan Calleri tried an ambitious lob from distance before Ruben Garcia’s curler from the edge of the area required an athletic save from Marc-Andre ter Stegen.

Messi shot wide and then set up the opener, drifting in from the right and spotting the scuttling Alba racing in behind on the opposite side. Messi clipped a pass through three Osasuna defenders for Alba to collect and he lashed it high and in from the angle.

Garcia deserved an equaliser soon after for his first touch alone, a sumptuous cushioning of a long ball forward, but Ter Stegen was again there to deny the finish.

There was more control about the second half but Barcelona needed a second to make it comfortable and substitute Ilaix seized his moment, shaping to shoot with his right before coolly rolling onto his left and whipping his shot into the corner.

While Barcelona sustained momentum from their midweek victory in the cup, Sevilla failed to bounce back, instead sinking to another loss away at Elche earlier on Saturday.

They sit six points ahead of Real Sociedad in fifth. Elche climb to 17th, two points above the bottom three.