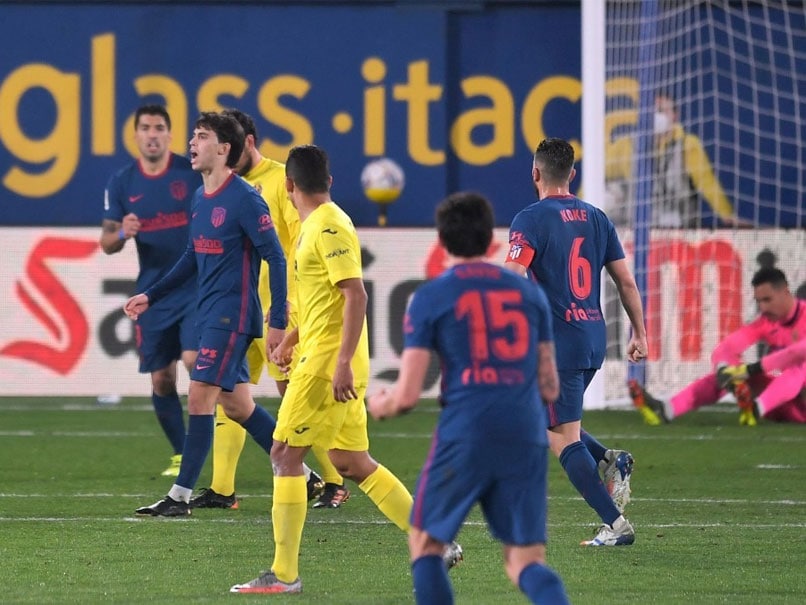 
Atletico Madrid bounced back from recent poor form with a hard-fought 2-0 win at Villarreal on Sunday that allowed the La Liga pace-setters to extend their lead to five points. An own goal from Alfonso Pedraza and Joao Felix‘s powerful strike gave Atletico a precious win after a wobble which had allowed Barcelona and Real Madrid to gain ground in the title race. Diego Simeone’s side had come into the match off the back of a Champions League last 16 defeat to Chelsea and a league run in which they picked up just five points from their previous four matches.

However despite Villarreal coming close on a number of occasions Atletico held on for a win that ensures they keep second-placed Barca at bay and crucially increase the gap between them and rivals Real Madrid to six points ahead of next weekend’s local derby.

Madrid can go back to within three points of Atletico when they host Europe-chasing Real Sociedad on Monday night.

“We suffered, and even after the second goal they had good chances. But we come home with a very important victory at this point in the season,” said Simeone.

Atletico opened the scoring thanks to Pedraza’s odd own goal mid-way through the first half, which came after long VAR check to see if Stefan Savic, who was initially credited with the goal, had strayed offside for Thomas Lemar’s cross.

Savic’s header was saved by Sergio Asenjo only for the ball to ricochet off Pedraza and into the net as the 24-year-old defender fell over.

Gerard Moreno should have pulled the hosts level when he met a Daniel Parejo cross but couldn’t muster a decisive finish and Savic recovered easily to clear the ball off the line.

Suarez could have doubled Atleti’s lead eight minutes after the break when he pounced on a defensive lapse to let off a powerful shot, only for Asenjo to pull of a superb reaction save to deny the Uruguayan.

However Joao Felix gave the away side the two-goal cushion they needed in the 69th minute, quickly latching onto a poor clearance by Pau Torres to lash home the second from just outside the penalty area.

Felix appeared to direct an angry look at Simeone after scoring, reportedly prompted by a lack of game time.

“I love rebel players, those that have pride. The goal brought something out in him,” Simeone said.

“He needed it, and the team needed that goal.”

The hosts responded, with Carlos Bacca somehow shooting wide when Moreno laid on a simple finish for the Colombian with 12 minutes remaining.

And teenage substitute Alex Baena was unlucky to finish the match without his first La Liga goal, first clipping the post in the 82nd minute and then forcing a brilliant save form Jan Oblak with a stinging volley.

However they couldn’t recover and sit seventh thanks to a run of seven matches without a win.

Earlier Real Betis moved above Villarreal as they maintained their bid for European football next season thanks to Juanmi’s late strike which earned them a 1-0 victory at struggling Cadiz.

Spaniard Juanmi rammed home a close range header with six minutes remaining to squeeze Betis past the home side and put them sixth.

Real Valladolid climbed out of the relegation zone despite extending their winless league run to eight in a 1-1 draw at Celta Vigo.

In an intense relegation scrap Valladolid are level on 22 points with Alaves and Eibar, Elche are 19th on 21 points and rock-bottom Huesca have 20.