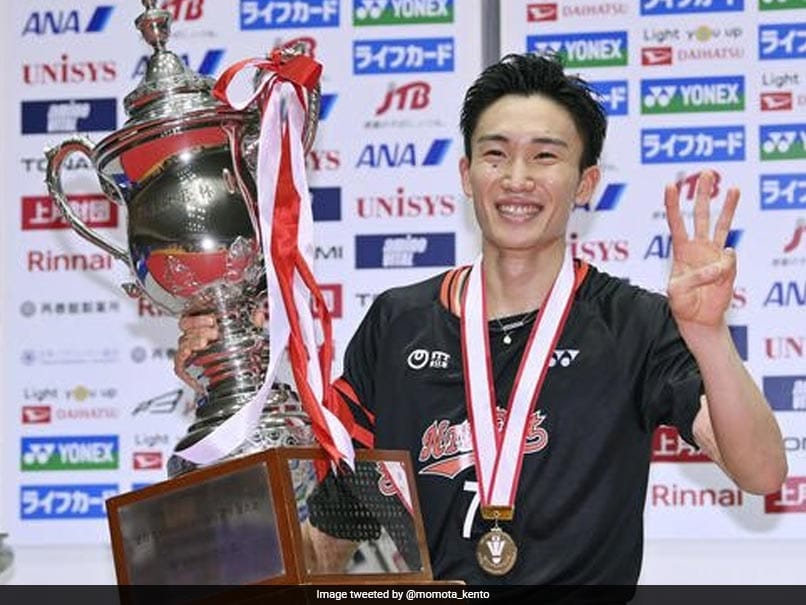 
Badminton world number one Kento Momota won the All-Japan championship on Sunday to complete the first step of his comeback, nearly a year after suffering serious injuries in a car crash. Momota came from behind to beat world number 11 Kanta Tsuneyama 18-21, 21-12, 21-17 in Tokyo, marking a successful return from the accident that left him fearing his career might be over after fracturing an eye socket. The win gave Momota his third straight national title, and he immediately turned his thoughts towards making his international comeback at the Thailand Open in January.

“I had the initiative in the first game but then I started to lose my cool once I had the lead,” said Momota.

“I think that’s because I’m still not used to playing matches. In the second and third games, I wanted to put all my feeling into it regardless of technique or tactics, and I think I willed myself to the win.

“The Thailand Open starts in the new year and I’ll be able to play against players from overseas. I want to go there and show what I can do as the top Japanese player.”

Momota was badly hurt in January when the vehicle taking him to the airport after he won the Malaysia Masters crashed, killing the driver.

He admitted to feeling nervous as he returned to competition this week in Tokyo, and he was pushed to the limit by Tsuneyama, who took him to 16-16 in the final game only to crumble with victory in sight.

“I was too cautious,” said Momota, who also had to come from a game down in the quarter-finals. “Before, my game was about using everything I’d built up over time, and my results gave me the confidence to do that.

“This week, I hadn’t played for a long time so I was very anxious going into each match. But I think my game will start to return now that I’ve won this title.”

Momota is one of Japan’s brightest hopes for a gold medal on home soil at the coronavirus-postponed Tokyo Games next year.

The 26-year-old left-hander won a record-breaking 11 titles last year, and he is confident of adding more after tasting success this week in Tokyo.

“I’m 70 percent relieved and 30 percent happy,” said Momota. “I’m known as world number one Momota, so I feel that I’m not allowed to lose.

“It wasn’t easy for me to get the number one ranking. It’s because of my experience and ability, and I really hate to lose.

“That pride helps me but there is also pressure, and I want to keep doing more. If I can, I want to get back to training tomorrow.”