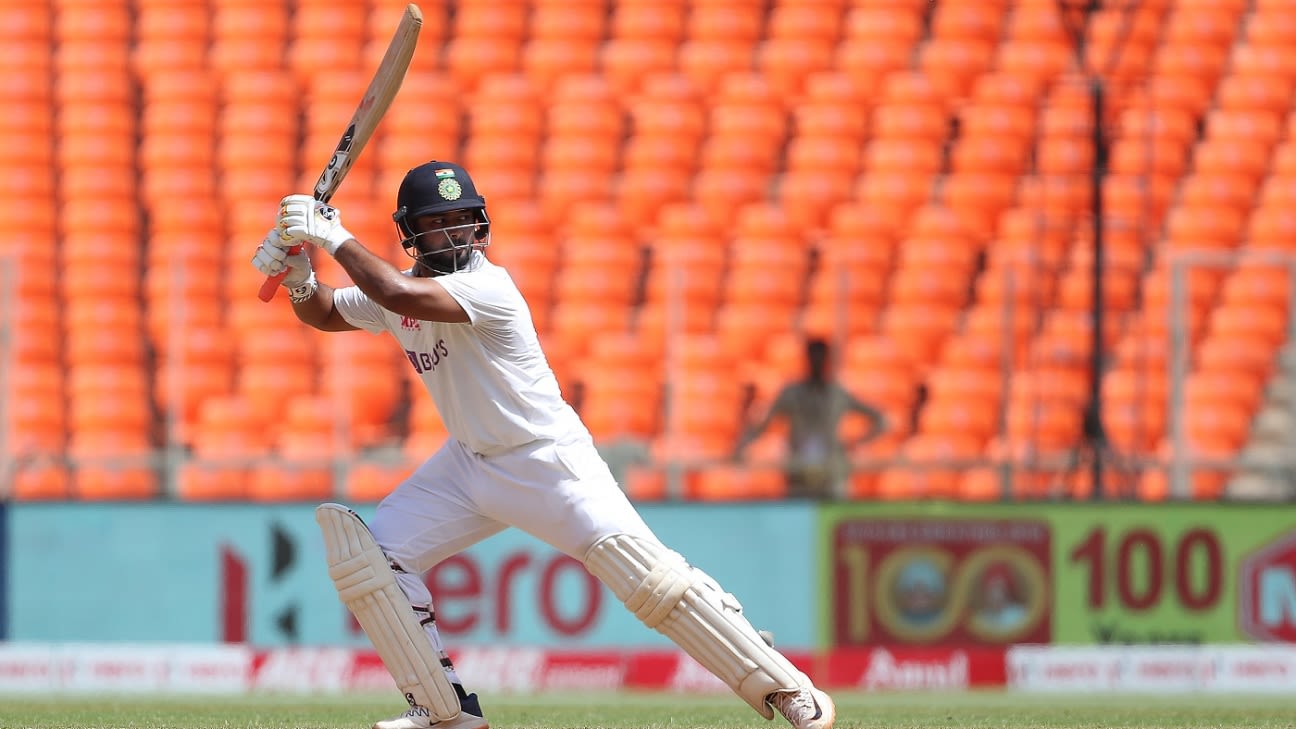 India faced a first-innings deficit in the fourth Test, slumping to 146 for 6 in reply to England’s 205, but Rishabh Pant powered them to a sizeable lead with his maiden century at home, saying he wanted to play his shots “after assessing the pitch”.

Pant walked in at 80 for 4 before Rohit Sharma and R Ashwin fell within the space of nine overs to leave the home side in a precarious position, still 59 adrift of England’s total with only four wickets in hand. Pant salvaged the situation with two contrasting half-centuries: a watchful fifty off 82 balls followed by an attacking 33-ball half-century to race to his hundred. The boundaries began to flow as the second new ball approached, and continued until he reached three figures with a massive six over square leg.

“I like to play according to the situation and I just see the ball and react to it, that’s the USP of my cricket,” Pant told the host broadcaster Star Sports after the second day’s play. “I thought after assessing the pitch I’m going to play my shots. Sometimes when the bowler is bowling well, like the other day, you have to give credit to the bowler also, and respect the ball. [If] you get a good ball, just look for a single or defend it.”

Pant was on 55 off 91 with just three overs left for the second new ball, when he switched gears by collecting two fours in an over against both Ben Stokes and Joe Root. On 75 and on strike against the new ball, he then hammered James Anderson for consecutive fours before unleashing an audacious reverse-lap two overs later against the same bowler that powered him into the 90s.

“The team plan was to get to 206 and then get as much of a lead as we can as a batting unit,” Pant said. “That was the only thing I had in my mind and everything went to the team plan.”

When asked if the reverse-lap against Anderson over the slips was premeditated, Pant said: “Yes, if you’re playing a reverse-sweep, you have to premeditate that, but when everything is going your way you can try your luck.”

It led to a century stand between him and No. 8 Washington Sundar, who remained unbeaten on 60 even as Pant fell for 101, as India wrested control of the match with a sizeable lead of 89 at stumps, with three wickets still in hand.

Vishal Dikshit is an assistant editor at ESPNcricinfo