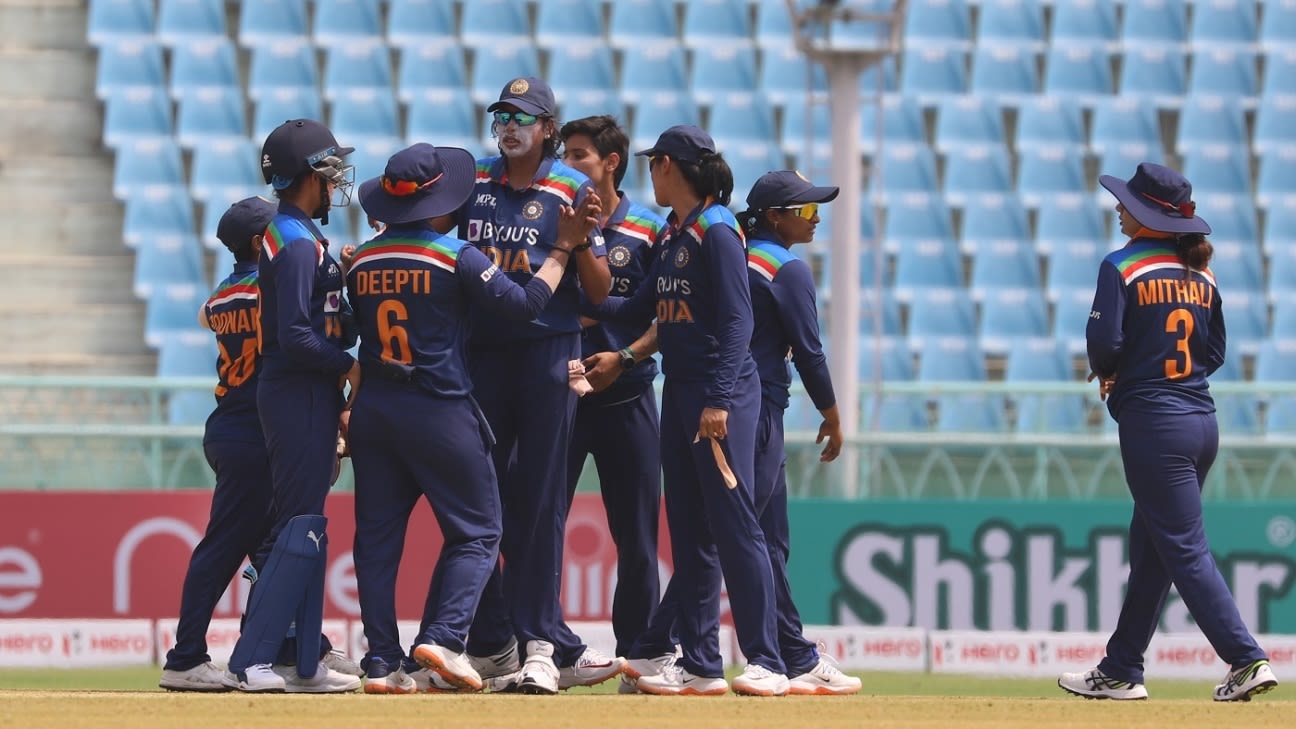 “If you’re bowling first, it looks like an advantage is there for bowlers,” agrees Goswami

There is some advantage to bowling first in Lucknow but not so much to justify first-innings scores of under 200, according to South Africa Women captain Sune Luus and India’s premier pace bowler Jhulan Goswami.

India and South Africa were bowled out cheaply in the two matches that have been played so far – for 177 and 157 respectively – and were untroubled in their chases. South Africa won the first match by eight wickets, India were victorious in the second by nine.

Goswami said the troubles upfront were because of the early starts and fresh conditions, which have eased up as the day has progressed. “We are playing a 9 o’clock match and when you are playing in a place like Lucknow, in the morning there is a little bit of moisture in the wicket. If you get the ball in the right area, it’s not easy to play shots,” she said after her match-winning four-for. “It’s much easier in the second innings. The wicket is very flat and you just need to play through the line. If you’re bowling first, it looks like an advantage is there for bowlers.”

Sune Luus on the challenge of facing Jhulan Goswami

Luus noted that there also seemed to be more movement on Tuesday as compared to Sunday, but laid the blame for the low total with South Africa’s line-up, rather than India’s bowlers. “It’s a good batting wicket throughout. For pace bowlers, there’s always something in it for the first 10 or 15 overs when you bowl first. And it was a fresh wicket today. There was quite a lot of movement. Their two opening bowlers – Goswami and Mansi Joshi – bowled extremely well with the new ball. But we didn’t execute our shots. I don’t think they bowled well enough to bowl us out with great deliveries, although they still bowled well. We gave our wickets away at the wrong times.”

South Africa lost six wickets for 44 runs to collapse from 113 for 4 in the 30th over to 157 all out after 41 overs, a total Luus deemed below-par. She identified anything over 200 as acceptable on this pitch, even batting first, not least against the game’s leading ODI wicket-taker. Goswami took the only two South African wickets to fall in the first match and four out of ten in the second game.

“She’s a lot taller than most women that we would have played against so you have to play her the way you play the length of a man. Where she bowls the ball from is very high so she automatically gets more bounce. It kind of sneaks up on you,” Luus explained. “But today, it was soft dismissals from her bowling. She bowled extremely well in the first 10 overs, nipping it around and asking questions. We need to see through the first ten overs where she is at her most dangerous and try and capitalise when she comes back. It comes down to better positions and better plans.”

South Africa’s task at hand is to work out how to improve performances from their middle order ahead of the next match, whether or not they bat first. However, with all five matches in this series due to be played at the same venue, and start at the same time, there may be a danger of proceedings playing out predictably, except if India, as Goswami warned, continue to get better after a rusty start.

“In the first match we were playing after a long time and it took time to settle our nerves. We were bowling both sides of the wicket and there and there but today was much more disciplined,” Goswami said. “When you are coming back after a long layoff you need to settle down.”

Argentina Calls Medical Board To Rule On Diego Maradona Death