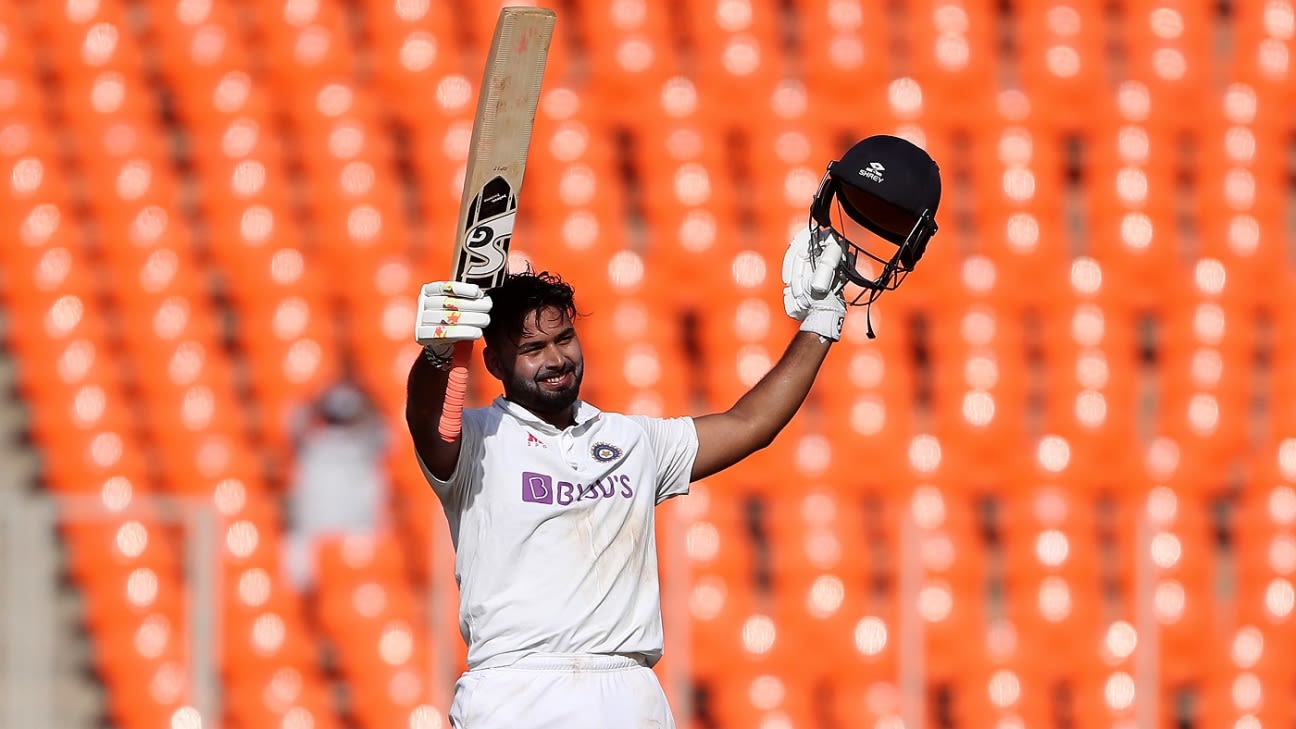 India completed two landmark series wins on the trot when they won by an innings and 25 runs in the fourth Test against England in Ahmedabad, having come from behind to first beat Australia away and then England at home. The wins, by 2-1 and 3-1 margins respectively, came with India having to battle a slew of injuries and absences of first-choice players – particularly in the Border-Gavaskar Trophy in Australia – while also facing a steeper equation to make the World Test Championship final due to the revised rules caused by the Covid-19 pandemic.

The injuries and the pandemic-enforced larger squads meant several players got opportunities they otherwise might not have, and head coach Ravi Shastri was full of praise for how the younger players – particularly Rishabh Pant, Washington Sundar and Axar Patel – had come through. Shastri spoke at length on each one in a media interaction on Sunday, a day after India had won the fourth Test to seal victory against England.

Rishabh Pant
Pant had arrived in Australia with “a lot of baggage” that he had to shed, physically. He was spoken to “in no uncertain terms” about what he needed to do, and Shastri said the wicketkeeper-batsman worked harder than anyone else in the squad, with the results visible.

“At 21, 22, 23, I had similar success. I had hundreds overseas so I can relate to what these guys have done,” Shastri said. “When you are young and don’t carry baggage, you’re not afraid. It’s only when the baggage comes, when you become known quantity and the pressures from the outside come in that you have to perform all the time, that’s when life starts. As it started with Rishabh Pant on this trip.

“He came with a lot of baggage. It showed in his size. And he had to lose that baggage, which he did. He worked his backside off to lose it. And I tell you, he has trained harder than anyone in the last two months. And the results are not just for him to see, it’s for the world to see.”

Pant has enjoyed a hugely productive Test season, topping India’s run charts with 544 runs in seven games while also showing great athleticism with the gloves. More than the runs, it was the game-changing nature of his innings that caught the imagination. He made 97 in Sydney as India held on for a draw, 89* to lead a historic fourth-innings chase in Brisbane and a brilliant counter-attacking 101 in the series-clinching Test in Ahmedabad.

“When you have a naturally brilliant match-winner of his ability playing to potential, there’s no greater sight in cricket,” Shastri said. “I think in the last two months what he’s done to win matches for India, there’ll be players who won’t do it in a lifetime and would have never done it in a lifetime. At the age of 21 to pull of magic like he has done, after working as hard as he has… to then show in his wicketkeeping. Like yesterday, I think his keeping was outstanding on that wicket.

“When you add the runs, the match-winning efforts, the keeping improving and the hard work he’s put in – like I mentioned yesterday, he was told in no uncertain terms that this game demands respect. You’ve got to respect the game much more than what you do – and which he did. He addressed it. He’s reaping the rewards now. Outstanding. Simply outstanding.”

Washington Sundar
When asked if Sundar – brought in as a bowler but who showed great batting chops – reminded him of himself, Shastri said the 21-year-old offspinning allrounder was much more talented, and that he should be batting in the top four for Tamil Nadu, his state side. Before his debut in Brisbane, Sundar hadn’t played a first-class game for Tamil Nadu for three years.

“Washington Sundar, unbelievable composure and temperament,” Shastri said. “I mean, for someone who – yes at Under-19 he was an opening batsman – to see that kind of body language, unfazed by the best bowlers in the world in the toughest situations as in Brisbane, [the first Test against England in] Chennai, here [in Ahmedabad] was unreal.

“I think he has far more natural ability than I had. Definitely, he should be batting in the top four for his state. No question about that. If I have to have a word with any of the Tamil Nadu selectors or the captain, with DK [Dinesh Karthik] or something of that sort – I think he should be batting in the top four. He’s good enough. He belongs there. He has the ability and he can get a lot of runs. And at the same time if he can focus on his bowling, India could have a very good No. 6 in the future, even overseas. Someone who can get you a 50, 60, 70 and then can bowl for you about 20 overs and pick up 2-3 wickets. That was my role overseas and I think he can do that role easily, and even better.”

Axar Patel
Patel played only three Tests against England, but made an impact in each one, ending up with 27 wickets at a scarcely believable average of 10.59. An allrounder at the domestic level, Patel’s runs tally overtook his wickets tally only in the first innings of the fourth Test, when he made 43 in a century partnership with Sundar that put the match beyond England.

Shastri said Patel, 27, wasn’t a “youngster” per se, and would have got his opportunities much sooner if it wasn’t for injuries. Patel’s Test debut came in the series against England, but he has already played 38 ODIs and 3 T20Is, having first represented India in 2014.

“This is the time when he was injury free, and he made the most of it. But try and think, India playing in India without Jadeja – he’s one of the best allrounders in the world, arguably the best allrounder in the world. He didn’t play, someone else grabbed an opportunity. Now when he comes in and the three play together, there’ll be some fun. In India, especially.”

Manchester City vs Manchester United: Live Streaming, When And Where To Watch Live Telecast