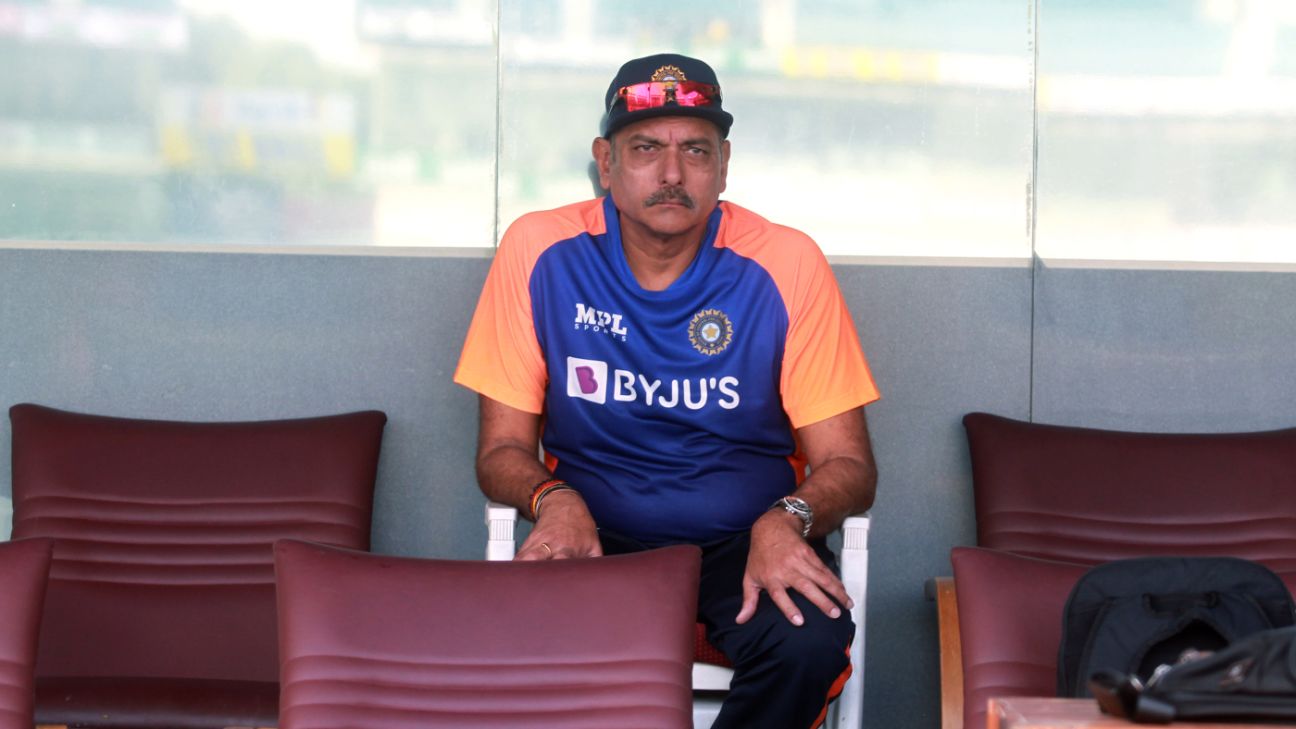 India head coach Ravi Shastri was at his expressive best after India completed a 3-1 series win against England, saying his team had been like “zombies” during the first Test and needed a “kick in the backside” to overturn the 0-1 deficit. Shastri also said the 3-1 scoreline didn’t necessarily reflect how close the series had actually been.

“I think the first Test in Chennai would have been different if we had a few more days off,” Shastri in an interview with broadcaster Star Sports. “It’s no excuse; England outplayed us there. The boys were like zombies. They were tired, and the fact that there was no crowds didn’t help. Because everything was flat. So was the performance. But then a kick on the backside to re-ignite the pride in the system can make a lot of difference. And it showed in the last three Tests.”

India had lost the first Test in Chennai by 227 runs, labouring as the side that bowled first on a flat surface where England put up 578 after batting more than two days. Their win in the second Test by 317 runs – also in Chennai – began a running narrative in the media about the quality of pitch that lasted for the rest of the series. The theme of those discussions, in general, was various players from the Indian team either playing down the topic or taking stern stands as R Ashwin did after the third Test. Shastri took a subtle turn in that direction as well at the end of the fourth Test, using a prompt about his not holding back with the team to bring the pitch – and the curator – into the conversation.

“Why should I hold back? I attribute [this] to the groundsman, since you don’t want me to hold back. I think Ashish Bhowmick [BCCI’s chief curator] is an outstanding groundsman,” Shastri said. “He knows his job, he’s learnt the hard way. He’s worked with Daljit Singh who was a master curator. And who will complain about tracks like this? I mean it’s fantastic entertainment, both teams are in the game. The result 3-1 doesn’t suggest how close the series was. It’s like our series in England when we lost 4-1, we had our opportunities. England had their opportunities here. Had they grabbed those opportunities, the result could have been different. But we seized on the opportunities that came our way and drove home the advantage. But the scoreline really doesn’t suggest how close the series was.”

The 3-1 scoreline confirmed India’s spot as finalists in the inaugural edition of the World Test Championship, and Shastri said it was a result of two-and-a-half years’ efforts, and a further six to set things up before that. India deserved to be in the final after putting 520 points on the board, he said, and was effusive in his praise of the younger players he has had to mentor.

“It’s a great feeling. [Mentorship] is something that you’ve done all your life and it is particularly satisfying in this role when you see youngsters coming through the ranks and performing in situations that are real tough,” he said. “Yesterday what Rishabh Pant and Washington Sundar pulled off was unreal. Because the pressure was back on us: we were trailing by 50 [59], still had to get runs on the board. And from there to get 360 [365] was an outstanding achievement. Full tribute to them. I think they’ll learn a lot from this. And this whole team. I think they’ve worked hard. This is not something that’s come overnight.

“He [Rishabh Pant] was told in no uncertain terms, he’s got to respect the game a little more. He’s got to lose a bit of weight, he’s got to work hard on his keeping.”

Rishabh Pant’s first home hundred drew praise from across the world, including from Adam Gilchrist on Twitter on Friday. The 23-year-old’s recent surge to become India’s first-choice wicketkeeper, alongside what now look like career-defining knocks, came after the team had gone hard on him, Shastri said.

“Simply magnificent. Because we go hard on him. Nothing comes easy. He was told in no uncertain terms, he’s got to respect the game a little more. He’s got to lose a bit of weight, he’s got to work hard on his keeping. We know the talent he has; he’s a genuine match winner. And he’s responded. He’s worked like hell over the last three or four months. And the results are showing.

“I mean yesterday’s innings is probably the best Test counterattacking innings I’ve seen in India by an Indian batsman. Especially at No. 6 where it’s not easy. When the ball is turning, the wicket is spicy. From there to respond in the fashion he did – with two separate innings. For me it was fearless all the way. And more fearless in the first half of his innings, because he played against the grain. He played against his nature. That’s also a challenge. Every time when you come out, you know this guy’s going to play shots but then to go against the grain, build a partnership with Rohit, and then turn it on after 50 – where all hell broke loose – he got a magnificent hundred. And that confidence rubbed on Washington Sundar. Let’s not take [away] anything from Washy as well. But since the question is on Rishabh – I think, simply magnificent. His keeping was outstanding.”

Varun Shetty is a sub-editor at ESPNcricinfo