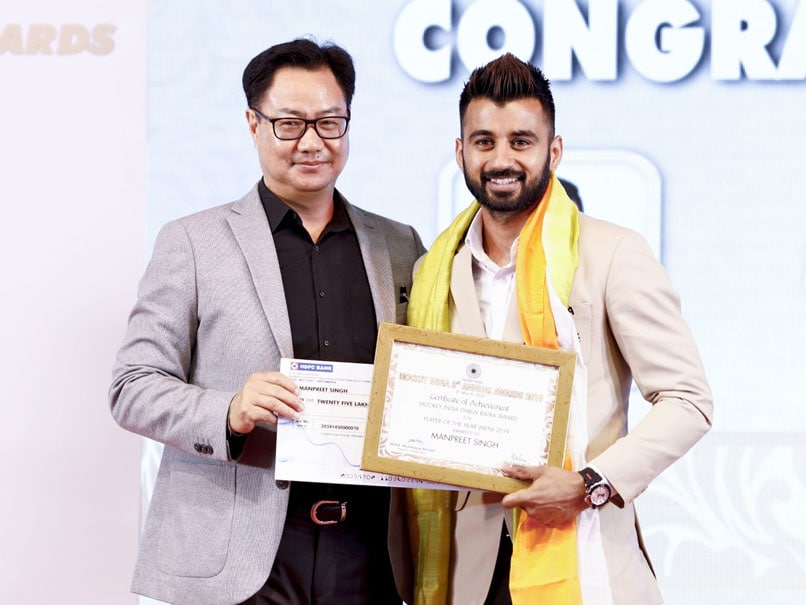 
National team captains Manpreet Singh and Rani Rampal on Sunday won the Dhruv Batra Player of the Year Award 2019 in the men’s and women’s categories respectively at the third Hockey India Annual Awards in New Delhi. Manpreet and Rani received a cash award of Rs 25 lakh each, besides trophies, as the achievements of the current and former Indian hockey players were celebrated at a glittering ceremony. The Hockey India Annual Awards carried a total prize purse of Rs 1.64 crore. It has been a wonderful 2019 for both Manpreet and Rani as they led the men’s and women’s teams to Tokyo Olympics berths.

Sports Minister Kiren Rijiju was the chief guest at the occasion.

“I always believed that hockey is the heart and soul of Indian sports. It is the pillar of Indian sports. I would like to assure that whatever support is needed from the government’s side for hockey, we will provide,” Rijiju said.

He received a cash prize of Rs 30 lakh and a trophy. The Milestone Awards were presented to Deep Grace Ekka, Kothajit Singh and Savita for playing 200 international matches.

They received a cheque of Rs 1 lakh each, plus a trophy. Harmanpreet Singh, Lalit Kumar Upadhyay and Nikki Pradhan were also recognised for playing 100 matches for India.

They were presented with a cheque of Rs 50,000 each and a trophy.

Rani was also given a cash prize of Rs 10 lakh for winning the prestigious World Games Athlete of the Year 2019.

“It was a great year for our team, and I would like to dedicate this award to my teammates and coaches, without whom I would not be holding this trophy. I hope this award will motivate, not only myself, but more players to give their best for the country and bring more laurels,” Manpreet said.

“I have always strived to work hard for my team and my country, and to have been recognised for doing the thing that I love doing the most, it gives me immense happiness. I would like to thank my teammates, coaches, family and Hockey India for their support. I dedicate this award to my team.”

Each of the above individual awards carried a cash prize of Rs 5 lakh besides a glittering trophy.

FIH President Narinder Batra said as head of the international federation he is happy to see the progress of the Indian teams.

“I would like to congratulate Hockey India for their efforts of raising the bar for Indian hockey to highest standards.

Hockey has always been a very important part of India’s sporting history. I am delighted to see that the game still has a high following in our country,” he said.