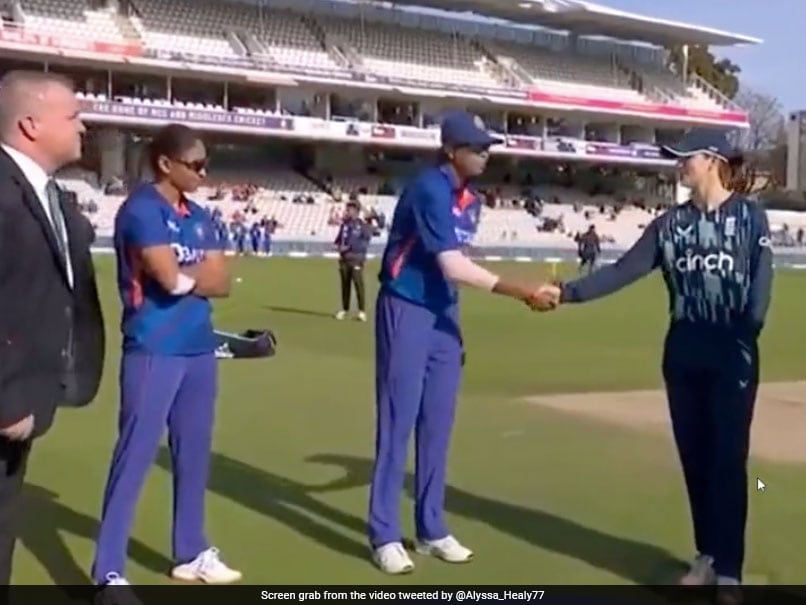 Harmanpreet Kaur’s Gesture For Jhulan Goswami Will Pull At Your Heartstrings. Watch – SportsDicted

It was a happy ending for legendary India fast bowler Jhulan Goswami as she bowed out of the sport on Saturday after India defeated England by 16 runs to sweep the three-match ODI series. Before the match, Jhulan was presented with a memento, and was also given a guard of honour by her teammates. However, India captain Harmanpreet Kaur had a memorable gesture in mind for the veteran pacer. After the team huddle, Harmanpreet was in tears before being hugged by Jhulan.

Harmanpreet decided to take Jhulan for the toss alongside her, and the 39-year-old called ‘head’ after England skipper Amy Jones spinned the coin.

Her gesture of kindness towards the outgoing pacer went viral on social media in no time.

Jones won the toss and put India into bat.

However, Smriti Mandhana and Deepti Sharma hit half-centuries to take India to a respectable total of 169.

In reply, England started brightly with openers Tammy Beaumont and Emma Lamb, who added 27 runs for the first wicket.

However, Renuka Thakur struck twice in quick succession to dismiss to both batters.

England then slumped to 103 for eight. However, captain Amy Jones and Charlie Dean put on a rearguard to frustrate the Indian bowlers.

Jones was dismissed on 28 by Renuka, who was the pick of the bowlers with four wickets to her name.

Dean, however, did threaten to take the game away from India, before she was run-out in a controversial manner by Deepti.

Deepti stopped in her run-up to remove the bails off at the non-striker’s end, putting an end to Dean’s stay in the middle.

Goswami picked the wickets of Alice Capsey and Kate Cross to finish with a spell of 2/30 in 10 overs.

She steps away with 355 international wickets, 255 of which came in ODIs. She retires as the highest-ever wicket-taker in ODIs among women.