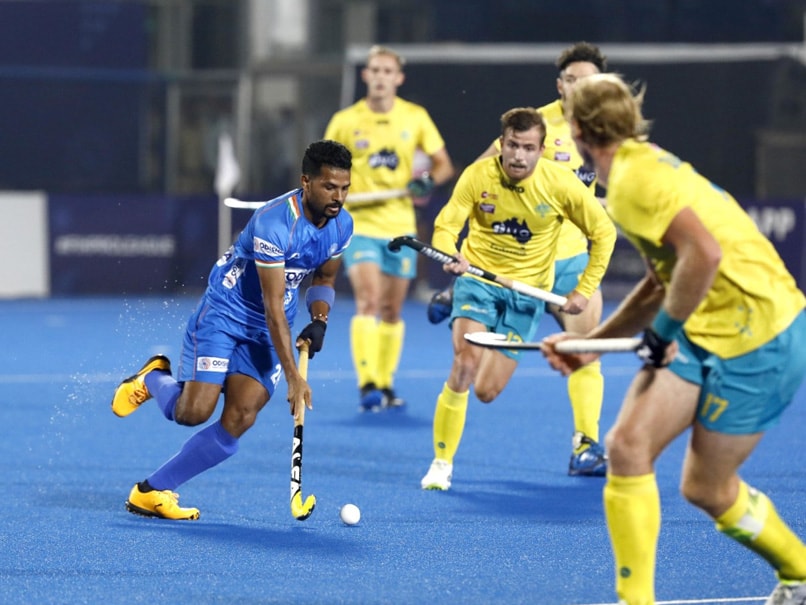 
India fought hard before losing 3-4 to defending champions Australia in their first match of the two-leg FIH Pro League encounter Bhubaneswar on Friday. Making their debut in the second season of the FIH Pro League, the Indians displayed their potential by claiming five points from a possible six against the Netherlands before claiming another three in a stunning 2-1 victory over Belgium, the reigning World and European champions. The Red Lions bounced back with a 3-2 win in the second match. But the hosts were made to toil hard by the world no.2 Australia before eventually losing the match in a close encounter. Dylan Wotherspoon (6th minute), Tom Wickham (18th), Lachlan Sharp (41st) and Jacob Anderson (42nd) scored four field goals for the winners.

By virtue of this win, Australia moved up to the third position in the standings with nine points from five games, while India are a rung behind with eight points from as many matches.

Australia showed why they are considered as one of most ruthless hockey teams in the world, taking the lead with the first chance of the match in the sixth minute with Wotherspoon deflecting home Sharp’s perfect pass from close range after an excellent break from skipper Aran Zalewski.

The Indians tried to bounce back from the early shock but were denied by Australia’s confident defensive unit.

Wickham doubled Australia’s advantage with a cool finish from close range, tapping home a perfectly weighted pass from Eddie Ockenden in the 18th minute, much to the disappointment of the home team.

The Kookaburras went into the breather with a two goal advantage. Five minutes into the third quarter, India earned a penalty corner but Rupinder’s drag-flick was brilliantly thwarted by Jake Harvie.

A minute later, the hosts pulled a goal back when Raj Kumar scored from a rebound after Rupinder’s initial flick from a penalty corner was blocked by Australia goalkeeper Andrew Charter.

Minutes later, India custodian Krishan Bahadur Pathak made a good save to deny Corey Weyer’s try from a penalty corner.

But Australia kept up the pressure and scored twice in a span of two minutes to take a comfortable 4-1 lead.

First Sharp slapped home a first time effort and then Anderson’s cross-shot from the left went under the body of Vivek to give Australia a 4-1 lead. But the Indians didn’t give up and reduced the margin four minutes later when Raj Kumar scored a fine field goal, his second of the day.

Eight minutes from the final hooter, Rupinder gave India hope after converting a penalty corner to make the scoreline 3-4. Veteran Indian goalkeeper P R Sreejesh then came to India’s rescue, denying both Anderson and Kurt Lovett with some excellent saves to keep the hosts in the hunt.

The Indians got a golden opportunity in the final minute of the game when they were awarded a penalty corner but a Rupinder Singh try went wide of the target.

India and Australia will square off in the second match here on Saturday.