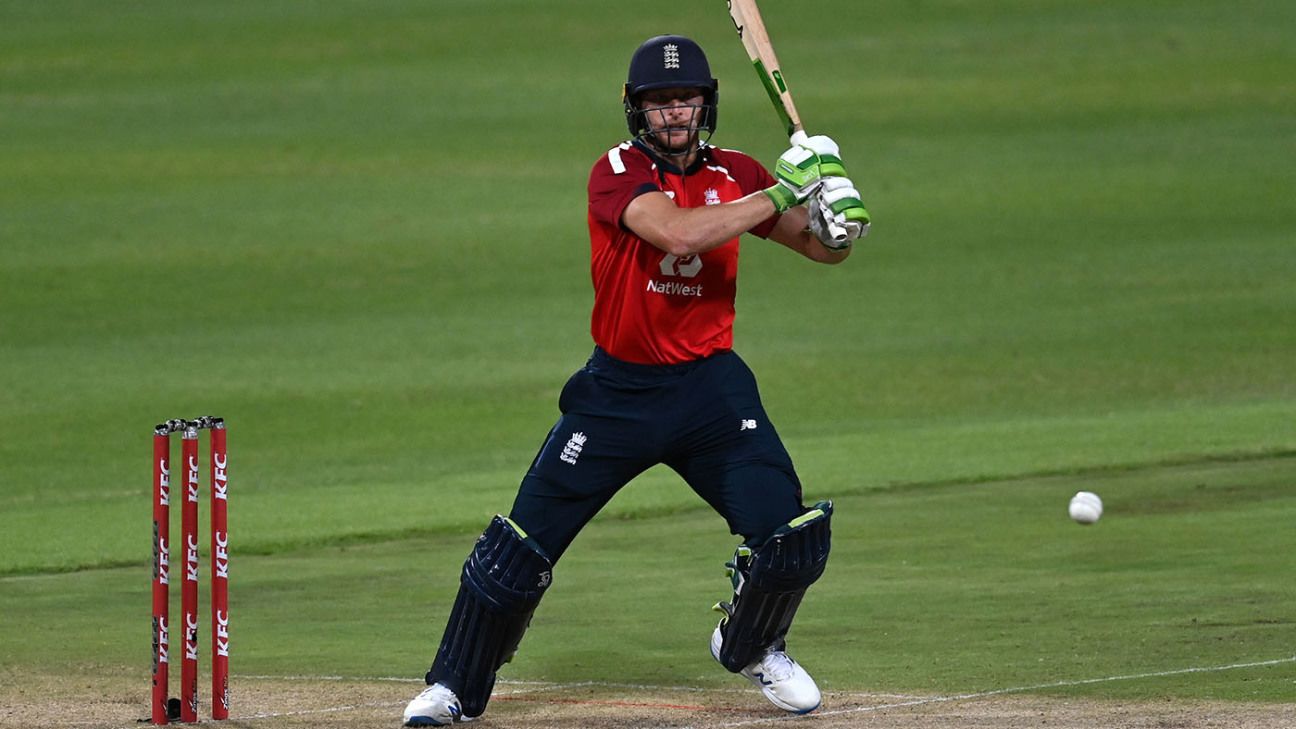 Buttler has remodelled his thinking after watching other players

What should be at the forefront of a batsman’s mind during a T20 run chase?

Conventional wisdom would suggest that the answer is the required run-rate, but for the world’s best players, that might not be the case anymore. Instead, batsmen are now thinking in terms of the boundary equation: how many balls do I have left, and how many boundaries do I need to hit off them?

It was a method embraced by the West Indies side that won World T20 titles in 2012 and 2016: while their opponents fretted over minimising dot balls and their speed between the wickets, West Indies focused on clearing the ropes, recognising that the risk was merited by the pay-off. Across the three tournaments between 2012 and 2016, West Indies hit 121 sixes; no other team managed 90.

And while West Indies’ own focus on six-hitting has continued, epitomised by Kieron Pollard‘s six sixes in an over off Akila Dananjaya last week, other teams and players have wised up. Jos Buttler, renowned as one of the world’s best batsmen in limited-overs chases, revealed his own mindset shift during England’s T20I series in South Africa last year.

“I’ve almost changed the way I look at T20 batting a bit from the last IPL, watching the West Indian guys who back their six-hitting a lot,” Buttler said. “So if I’m getting a bit stuck, [I’m now] looking at my score and thinking if I hit the next two balls for six, suddenly I’ll jump into a different position.”

Three days out from England’s T20I series in India – which he sees as a “vital” chance to take on a team who are favourites for a T20 World Cup in their own conditions – Buttler elaborated on his approach, explaining that the shift in his mentality was about “continuously learning: looking at other players and how they set up their own innings chasing targets down”.

“For me, I’ve always wanted to operate around a run-rate and try to make sure I’m up with the rate [when I’m] chasing,” he said. “I would feel like I would force the issue sometimes and sit in the dressing room and think I’ve tried maybe to force it a bit earlier [than I needed to].

“Having watched other players in the IPL and in other international games, they seem to maintain a calm look on it and see chasing as ‘we need to hit seven sixes in the remaining five overs’. I’ve never really myself thought of it like that before.

“[I’m] actually just trying to bring that a bit more into my game and into my mathematics of chasing scores down – not looking at runs per ball or runs an over that’s required, actually saying if we hit X sixes, that will win us the game. It’s just a change of mindset and [a case of] continually learning.”

The change may seem subtle, but it typifies the improvements that top batsmen are making to their T20 method as they look to minimise risk while maximising opportunities to score. Increasingly, that involves targeting favourable match-ups and shorter boundaries, meaning that players like Buttler are comfortable going through brief lulls in the knowledge that they will be able to hit several boundaries in a single over when the situation suits them.

The shift has been apparent in a number of Buttler’s recent innings. In the English summer, he nudged his way to 25 off 24 balls in a chase of 158 against Australia before adding 52 off his next 30, targeting the spinners as the game wore on. In the IPL, he was happy to soak up pressure when facing Chennai Super Kings and Mumbai Indians‘ spinners during run chases and instead took down Piyush Chawla, Rahul Chahar and Krunal Pandya, who he saw as the bowlers to take down as the game wore on.

It was particularly clear in England’s most recent T20I, against South Africa in Cape Town.

At the start of the 11th over, England were 85 for 1 with Buttler on 23 off 24 balls, and 107 runs required off the final 10 overs. With the inexperienced Lutho Sipamla bowling to a short leg-side boundary, Buttler thrashed consecutive sixes over long-on, and added another four for good measure to take the required rate below the current one in the space of an over. It was a calculated assault: he was watchful against Lungi Ngidi and George Linde, the bowlers he saw as a threat, but brutal against the perceived weak link.

“There are a number of guys who seem to look at the game like that – I’m probably a bit embarrassed that I hadn’t picked up on that sooner to be honest,” Buttler said. “I’ve always been someone who, when chasing, likes to be in and around the rate, but there’s other guys who seem to allow that rate to get larger but backing their six-hitting. It’s more about me backing my six-hitting availability and feeling that I can rely on it if I need it.”

The result has been a rich vein of form in T20 run chases. Since the start of 2020, Buttler averages 47.09 in run chases, with a strike rate of 153.25, all while navigating a shift into the middle order for Rajasthan Royals and shifting back up to open for England.

If he can maintain that sort of record over the next 12 months, England will fancy their chances of becoming the first men’s team to hold both World Cup trophies simultaneously.