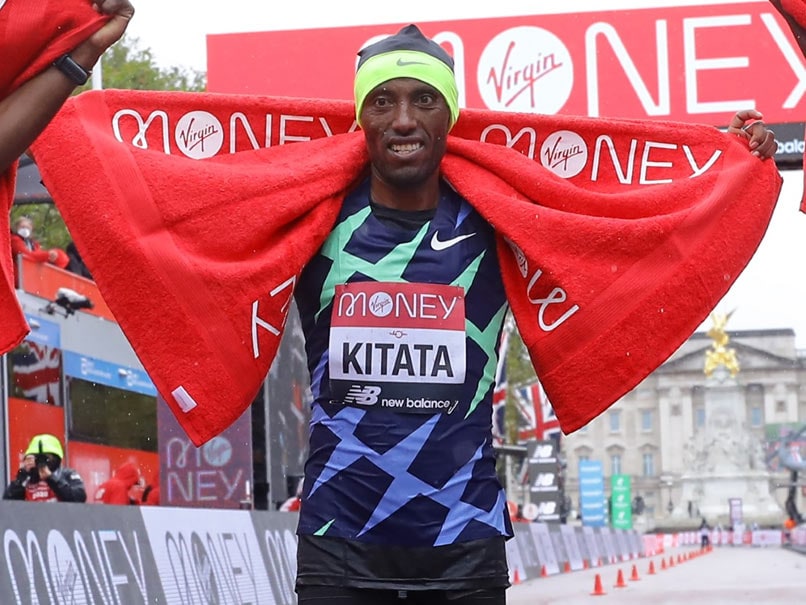 
It proved 13th time unlucky as world record holder Eliud Kipchoge fluffed his lines at Sunday’s London marathon, won in a thrilling sprint finish by Ethiopian Shura Kitata. The coronavirus-hit marathon, limited to elite runners and with no crowds, was the first Kipchoge hasn’t won since finishing second in Berlin in 2013 — he had won all 11 others he raced in, including the 2016 Rio Olympics.

Dropped at the 38km mark of the 42.2km race, Kipchoge could only watch from a distance as Kitata outpaced Kenyan Vincent Kipchumba in the final strait to win in 2hr 05min 41sec. Ethiopian Sisay Lemma took third.

“I am really disappointed,” the 35-year-old told BBC. “I had a problem with my right ear after it blocked and then I really cramped and had problems with my hip.

“It was cold but I don’t blame the conditions.”

Kipchoge added: “The last 15km I felt it. I felt well in the start. Absolutely there are more marathons in me and I will come back again.”

Originally due to be run in April, the London Marathon was rescheduled to October because of the coronavirus pandemic that has seen many top track and field events either cancelled or postponed, most notably the Tokyo Olympic Games.

Rather than the usual mazy run through the streets of the British capital, the course was made up of 19 1.5-mile loops around St James Park, with the iconic Buckingham Palace framing the finish line.

The men’s race had been touted as a showdown between Kenyan legend Kipchoge and Ethiopia’s Kenenisa Bekele, arguably the best track athlete in the world.

But Bekele pulled out Friday with a calf injury, taking the gloss of what would have been a battle for the ages.

Instead, Kipchoge seemed to have missed the hot pace he is used to, meaning a lead pack of eight runners unusually remained in the running late into the race, held in cold, rainy conditions.

Having to negotiate the curves of the looped course, the pace fell well below the personal bests of the leading peloton. Fireworks were promised at the end, and so it proved.

The podium finishers came into the final kilometre three abreast.

Lemma was dropped as Kipchumba surged, but Kitata somehow found a last drop of energy to reel the Kenyan in and keep his nose in front to win by a second in a dramatic finish.

“Kenenisa Bekele was helping me for this race and he advised me how to run. I trained for the same course, I am very happy to win the race,” Kitata, who finished second in the 2018 London and New York Marathons, told BBC.

There was some joy for Kenya, however, as Brigid Kosgei retained the women’s title, producing a brilliant solo run to claim a fourth career win in the event.

Kosgei clocked 2hr 18min 58sec, crossing the line ahead of American Sara Hall, who timed a personal best of 2:22.01.

Kosgei, the women’s world record holder in the marathon and also twice a winner of the Chicago Marathon, cut loose from Chepngetich on the 18-mile mark and kept her rhythm as she lapped many backmarkers en route to the finish line.

“The weather is not good. So we struggled,” Kosgei told BBC.

“It’s wonderful to race. We have not prepared well due to the pandemic. I struggled up to the moment I finished.”