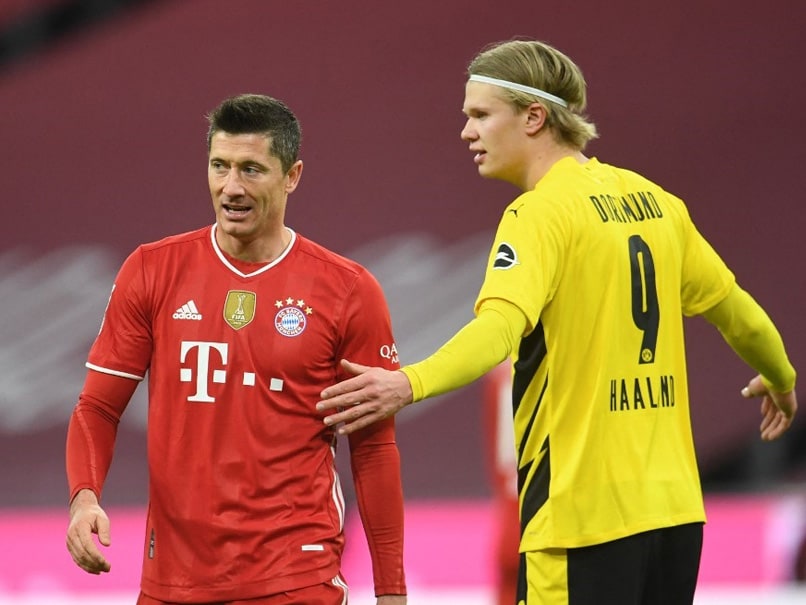 
Robert Lewandowski scored a hat-trick to leave him on 31 Bundesliga goals this season and seal Bayern Munich’s 4-2 comeback home win over Borussia Dortmund on Saturday in Germany’s ‘Klassiker’. Dortmund raced into a 2-0 lead as Erling Braut Haaland netted twice in the first nine minutes behind closed doors at the Allianz Arena. However Lewandowksi then struck twice, the second from the penalty spot, to haul Bayern level before the break. Leon Goretzka put Bayern ahead for the first time with two minutes left before Lewandowski completed his hat-trick on 90 minutes.

“The quality is certainly there, that’s our DNA,” said Thomas Mueller of Bayern’s fightback.

The win leaves Bayern Munich two points clear of RB Leipzig at the top of the table.

“We shook ourselves up at 2-0 down and deserved to win because we were the dominant team for (the last) 60 minutes,” said Bayern coach Hansi Flick.

Bayern have won the last five meetings between the clubs.

“We weren’t good enough. We started well, but didn’t play good enough football. We should have been more brave,” said Dortmund midfielder Emre Can.

The match delivered on its billing as the battle of the Bundesliga’s star strikers.

Haaland scored with just two minutes gone when his shot clipped the heel of Jerome Boateng.

Bayern were reeling after nine minutes when Thorgan Hazard flicked the ball back inside for Haaland to again smash the ball home.

Dortmund could have been 3-0 up on 25 minutes but Thomas Meunier squandered the chance to shoot.

A minute later, Bayern pulled a goal back when Leroy Sane squared the ball for Lewandowski to score.

Bayern went into the break level when Mahmoud Dahoud brought down Kingsley Coman in the area and Lewandowski converted the penalty.

After a frantic first-half, the tempo dropped in the second as both teams suffered key injuries.

Haaland came off after an hour gone with a cut on the back of his ankle.

With ten minutes left, Boateng had to be helped off in clear discomfort after twisting his knee.

Dortmund were left fuming for what captain Marco Reus claimed was a clear foul on Can late on.

“It was a clear foul – if that had been against Bayern, it would have been given,” fumed Marco Reus.

Bayern settled the matter when Goretzka pinged his shot in off the post before Lewandowski completed his hat-trick with an outstanding low drive.

Earlier RB Leipzig briefly climbed top of the table with a 3-0 romp at Freiburg thanks to goals by Christopher Nkunku, Alexander Sorloth and Emil Forsberg.

Leipzig impressed in their final tune-up before facing Liverpool in Budapest next Wednesday in the last 16 of the Champions League having lost the first leg 2-0.

Third-placed Wolfsburg are now ten points adrift of Bayern having stumbled to a 2-1 defeat at mid-table Hoffenheim whose striker Andrej Kramaric scored the winning goal just before half-time.

Eintracht Frankfurt stay fourth after Filip Kostic equalised for the home team in a 1-1 draw against Stuttgart.

A late goal by Leverkusen striker Patrik Schick sealed their 1-0 win at Moenchengladbach, who drop to 10th as their miserable run continues.

Gladbach have now lost all fives games since it was announced head coach Marco Rose will take charge of Dortmund next season.

The away win eases the pressure on Leverkusen coach Peter Bosz. His fifth-placed side had failed to win any of their five previous games in all competitions.

It was Hertha’s first victory in 10 games which pulled them up to 14th and away from the relegation fight.