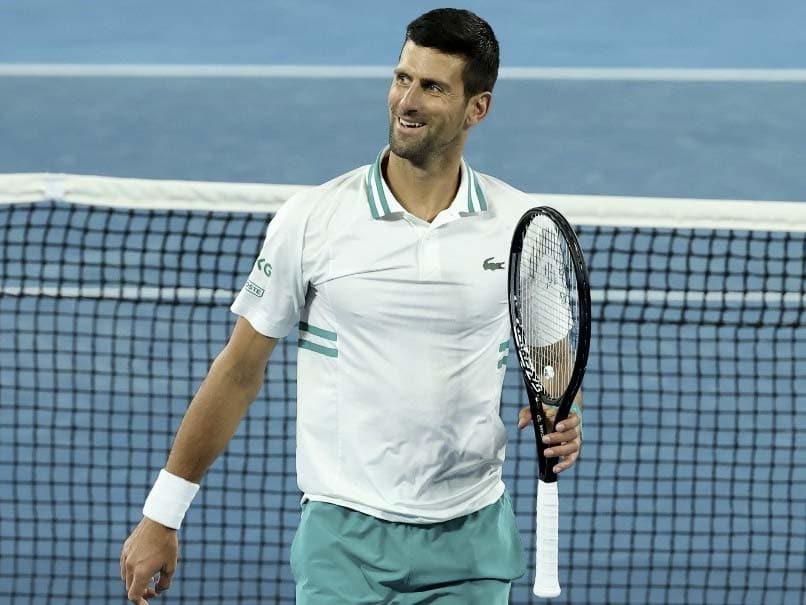 
Novak Djokovic clocked his 300th Grand Slam win Sunday, playing through pain from an abdominal injury that nearly forced him to pull out of the Australian Open to oust Milos Raonic and make the quarter-finals. The world number one took to the court despite suggesting his title defence might be over on Friday after sustaining the injury in a thrilling five-setter against Taylor Fritz. He battled on against giant Canadian Raonic on a fan-less Rod Laver Arena, grinding through 7-6 (7/4), 4-6, 6-1, 6-4 to set up a clash with sixth seed Alexander Zverev. But Djokovic said if it wasn’t a Grand Slam, he would have pulled out.

“No preparations, basically, for this match. I used every single hour I had since the last match against Taylor to recover and put myself in a position where I have a possibility to compete,” he said.

“If it was any other tournament than a Grand Slam I would retire and withdraw,” he added.

“I didn’t know before I finished my warm up today, three hours before, whether I would play or not.”

Djokovic’s win was his 300th at a Slam, only the second player in history to reach the mark after Roger Federer, on 362.

It kept him on track for an 18th Grand Slam title in his bid to close in on the 20 held by the Swiss great and Rafael Nadal, who plays on Monday.

He has already won a record eight times in Melbourne, the scene of his maiden Slam triumph in 2008, where he remains unbeaten since his shock loss to South Korea’s Hyeon Chung in the 2018 round of 16.

Despite his injury struggles, Djokovic was always the favourite, having won all 11 of his previous encounters with the big-serving Canadian, dropping just three sets in the process.

But 14th seed Raonic is also extremely experienced at this level, having reached five quarter-finals or better at Melbourne Park over the past six year.

And he proved a tough opponent, sending down two thundering aces in the opening game to highlight his serving power, with some rockets clocking in at 223 kph.

Djokovic’s movement seemed unhindered and he finally worked his first break point in game six, but squandered it with a forehand into the net as Raonic held on.

He earned another in the eighth game but again failed to capitalise and it went to a tiebreaker where a wayward Raonic volley gave the Serb an early advantage and he didn’t look back.

Raonic’s right ankle was taped in a medical timeout at 1-2 in the second set, but he still broke Djokovic to go 4-2 ahead with a sizzling crosscourt forehand and took the set.

The Serb, though, was returning serve at a high percentage and he finally converted a break point when Raonic sent a forehand wide to take a 3-1 lead, and broke again to seal the third set.

It went with serve in the fourth set until Djokovic worked break points in the ninth game, finally converting on the third to move 5-4 ahead and serving out for the match.