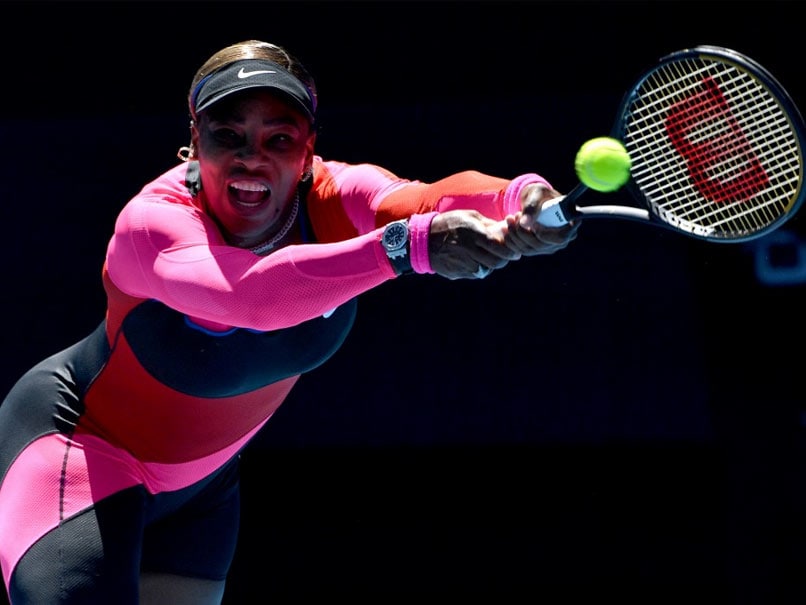 
With the Australian Open having begun on February 8, the Grand Slam has sprung many surprises including the departure of defending champion Sofia Kenin. Meanwhile, home favourite Nick Kyrgios had to show resilience in the win against Ugo Humbert. Kyrgios also had his famous on-court outburst. The tournament has also seen Serena Williams embrace her sense of fashion once again with a one-legged catsuit inspired by Athletics legend Florence Griffith Joyner. Aussie tennis ace Bernard Tomic also disappointed his fans with a weak defeat to Denis Shapovalov on Wednesday.

Five talking points from the Australian Open on Thursday:

Serena Williams’ flashy, one-legged catsuit — inspired by controversial track legend ‘Flo-Jo’ — has stolen the show in Melbourne, despite being a “last-minute” creation.

Williams said the vibrant outfit, a nod to the late Florence Griffith Joyner, only came about because a previous design “wasn’t as Serena-esque”.

“So the Nike team went back and created something very Serena-like and didn’t have time to put it in retail, so it was definitely more of a last-minute outfit than usual,” said the 39-year-old.

Griffith Joyner remains the fastest woman in history, holding the 100m best of 10.49sec set at the 1988 Seoul Olympics — a remarkable feat that was attracted much speculation about drugs.

“If you look up close, it’s actually breathable and it’s perforated,” Williams added.

“So it’s actually super-light and to a point where I need to make sure I’m wearing underwear,” she confided.

Nick Kyrgios loves an on-court outburst, but without any line judges this year he found a new target during his five-set thriller against Ugo Humbert on Wednesday night — the net cord sensor.

Play was stopped on multiple occasions, with the electronic machine used to alert the umpire malfunctioning on what looked like clean aces, which were then deemed lets.

“It’s tough, because having technology like that you sound like an idiot trying to argue against it,” said Kyrgios.

Kyrgios was joined on court by umpire Marijana Veljovic at one point as she inspected the net equipment while the Australian ranted that she turn off the machine.

“I was, like, there’s no chance this is accurate, in my opinion. The line calling, look, we can’t do anything about that, because that’s for Covid reasons. That’s fair enough.

“She was like, I turned the sensitivity down, yet it was still beeping when the serves were good, like, an inch above the net. So I don’t know.”

Djoker and the joker

As world number one, Novak Djokovic gets to hob-nob with plenty of celebrities from the world of sport and beyond but he revealed this week that NBA legend Michael Jordan and Hollywood funny man Jim Carrey were top of his list among stars he had yet to meet.

“I haven’t met Michael. Obviously I’m not the only one,” Djokovic said at the Australian Open, where he is seeking a record ninth crown.

“He’s one of my childhood heroes, people I was looking up to, probably as most of this world. We have a lot of common friends. I hear he loves golf. Maybe I can catch him on some of the golf courses in the future.”

He would also like to discuss the world with the eccentric Carrey, star of movies such as “The Mask” and “Ace Ventura: Pet Detective”.

“Jim Carrey I would love to meet,” said Djokovic, who began life growing up in war-torn Serbia before rising into the glamour world inhabited by top tennis stars.

Bernard Tomic hasn’t endeared himself to the Australian public in recent weeks, but he can still give as good as he gets.

The oft-controversial Aussie took a battering online when his girlfriend complained she had to wash her own hair during pre-tournament quarantine.

And despite winning his first Grand Slam match since Wimbledon 2018 in round one, he attracted more criticism for his meek 6-1, 6-3, 6-2 defeat to Denis Shapovalov on Wednesday.

Asked whether he thought Fitzgerald’s comment was harsh, Tomic fired back: “Of course it is. But, you know, he’s probably the worst commentator I’ve ever seen in my life, as well.”

Many players competing at the Australian Open have expressed their disdain for being forced into mandatory 14-day quarantine, but in-form Kaia Kanepi is not among them.

The Estonian veteran produced the upset of the tournament Thursday when she knocked out defending champion Sofia Kenin in straight sets.

It’s a reversal of form for Kanepi at Melbourne Park with the Australian Open being her bogey Slam having not made it past the third round in 11 prior attempts.

She’s made it twice to the quarter-finals stage at each of the other Grand Slams.

“This year I think coming here for two weeks in quarantine and then the warm-up tournament also in Melbourne, I think that’s what helped me,” she said.

“In Melbourne, the weather changes a lot and it’s tougher to get used to the conditions.

“This year I think it helped that I got many matches in the previous week to get used to the conditions.”