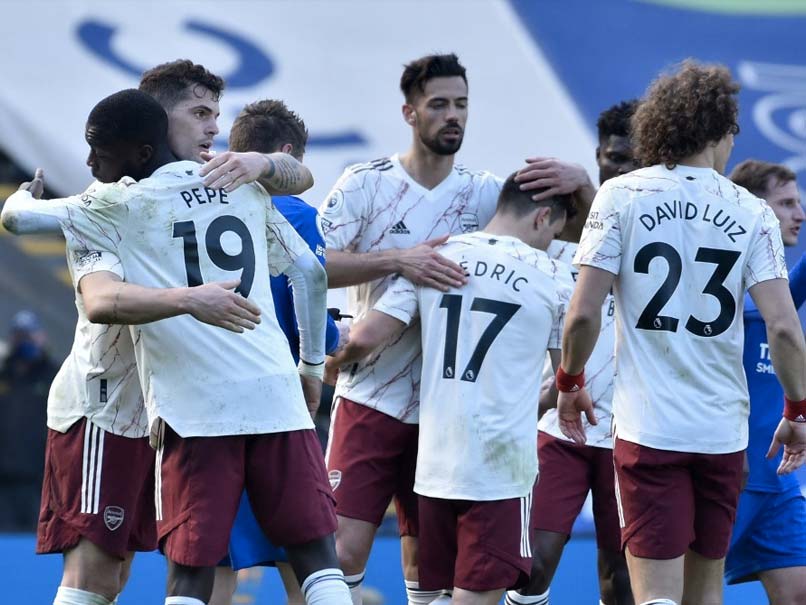 
Arsenal delivered a hammer blow to Leicester’s faint hopes of winning the Premier League with an impressive fightback to win 3-1 on Sunday. Mikel Arteta’s side fell behind to Youri Tielemans’ early goal at the King Power Stadium. They had lost nine of 11 league games when they conceded the opening goal this term. But David Luiz equalised and Alexandre Lacazette’s penalty gave the Gunners the lead just before half-time. Nicolas Pepe’s second half goal sealed Arsenal’s second win in their last six league games.

After Thursday’s shock Europa League exit against Slavia Prague, it was a week to forget for Leicester manager Brendan Rodgers.

Arsenal have virtually no chance of finishing in the top four, but this was still a significant result as it underlined the potential in Arteta’s team.

With Arsenal languishing in mid-table, Arteta has prioritised winning the Europa League as his side’s only hope of qualifying for next season’s Champions League.

Having picked his best team for the dramatic come-from-behind 3-2 win against Benfica in the last 32 second leg on Thursday, Arteta made six changes.

He left Pierre-Emerick Aubameyang and Bukayo Saka on the bench after the long trip back from the neutral venue in Greece.

Tielemans was gifted time and space by the lumbering Granit Xhaka to break into the Arsenal area.

Pablo Mari was slow to react to the danger, allowing the Belgian midfielder to advance unchecked before drilling a low strike into the far corner.

Arteta’s men thought they had earned a penalty when referee Paul Tierney pointed to the spot after Pepe’s run was ended by a combined challenge from Tielemans and Wilfred Ndidi.

But VAR checked the incident and changed the decision to a free-kick as Ndidi made the first contact with Pepe just outside the area.

Willian has endured a difficult first season at Arsenal after his move from Chelsea.

The Brazilian winger finally enjoyed a moment to savour as Arsenal drew level in the 39th minute.

Willian’s out-swinging free-kick arrowed towards Luiz and the defender stooped to direct a powerful header past Kasper Schmeichel from 10 yards.

They ignored that setback to take the lead in first half stoppage-time.

Lacazette stepped up to slam the penalty past Schmeichel for his 11th goal of the season.

There was another blow for Leicester — already without the injured James Maddison — when Harvey Barnes was stretchered off with his left knee heavily wrapped early in the second half.

Leicester were on the ropes and Arsenal landed the knockout punch in the 52nd minute with a superb counter-attack.

Xhaka found Pepe wide on the right and the Ivorian picked out Martin Odegaard on the edge of the area.

Odegaard clipped a deft pass to Willian and his cutback was perfectly placed for Pepe to tap into the empty net.

It was Pepe’s fourth goal in his last seven league starts, underlining a long-awaited improvement from the winger.

In Sunday’s other early match, Fulham had to settle for a 0-0 draw at Crystal Palace.

Third bottom Fulham are three points behind fourth bottom Newcastle in the fight to avoid relegation.