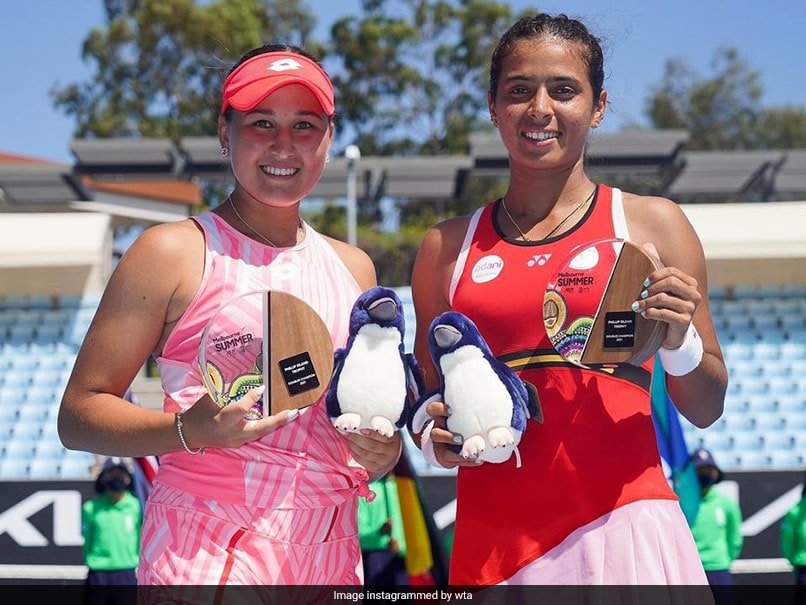 
India’s Ankita Raina on Friday claimed her maiden WTA title by lifting the Phillip Island Trophy along with Russian partner Kamilla Rakhimova, a feat which will catapult her into the top-100 in the doubles for the first time in her career. Ankita and Kamilla erased a one-set deficit to beat the Russian combination of Anna Blinkova and Anastasia Potapova 2-6, 6-4, 10-7 in the summit clash in Melbourne.

The 28-year-old Indian shared the USD 8000 prize money with her partner and earned 280 ranking points, which will take her to 94 from the current 115 when the WTA doubles chart is updated next week.

Ankita will become only the second player to crack the doubles top-100 since Sania Mirza, who is a six-time Grand Slam champion.

The past two weeks have been extremely memorable for the gritty Indian, who made her Grand Slam debut at the Australian Open in the doubles, and also won a round in the main draw of a WTA singles tournament.

Elated at her performance and the result, Ankita says the singles top-100 is also just around the corner.

“It’s been a great week. Kamilla and I played together for the first time. We signed up just 20 minutes before the draw because there was a lot of confusion with the entry list.

“Kamilla plays very aggressive, has good strokes and I just had to ask her to be aggressive at the net, which she did,” Ankita told PTI.

“It was not that draw was easy, we beat some good players who were tough not only in doubles but in singles, too. Kamilla has great fighting spirit. It’s great… first WTA titles and doubles top-100, too. I am looking forward to crack singles top-100,” she added.

“We were 7-9 down by two match points in the semis. I had some great volleys. I was working on that and when I could do that (execute) in match nothing is more exciting.”

Indian tennis players have always struggled to get finances and enough support to survive on the demanding tour but Ankita did not make any such complaint. Instead, she thanked all who supported her.

Also, at 5 feet and four inches, she does not have a frame to counter the taller and stronger rivals. However, Ankita insisted that, too, is not an issue for her.

“I don’t think my height is an issue for Indian females. It’s average, of course on the international circuit there are players with bigger physique but then there are also who are leaner or shorter than me.

“So I feel one just needs to work on their strengths and have a game accordingly.

“As far as infrastructure and all is concerned, in Ahmedabad where I started playing tennis, there were tennis courts, tennis academy right behind my house and if it wasn’t there then it would be a different story and I might not be here.

“But since I started playing there’s been a lot of development in terms of sports and tennis and it’s much bigger now in India.

“Of course it can be better and I’m very sure with more players it’ll come up more. Also during my transition period from juniors to women’s, I remember there were a lot of ITFs which I participated in India and did well, which helped me to start my Pro career.

“As far as coaching is concerned I’ve always been coaching in India, started in India and still training here so I wouldn’t agree (complain) with that part,” she said.

Ankita will compete in Adelaide International, starting next week.